Not that long ago, certain “anonymous sources” spread a rumor that the Russian Army is going to reduce the number of tanks from 22,000 to 2,000. This is a gross overstatement. Yet, there is certain truth to it as the other day the Ministry of Defense made an official statement that the Army does not need half of its tanks (over 10,000). Half of the remaining tanks would be used as battle tanks, while the other half would be in reserve. 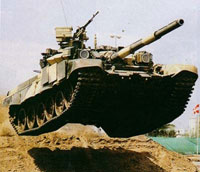 If we count only battle tanks that should be in working order at all times, Russia, which is now number one in the world in terms of number of tanks, will drop to the middle of the top ten. This is alarming. The information makes you think whether Russian criminal voluntarism of Khrushchev’s times, when the country was eliminating military equipment, is coming back?

For many, the local five day war with Georgia in 2008 is still fresh in memory. If Russian troops had not been supported by tanks, the results might have been different. However, the tank support could have been more powerful if all the tanks were combat-ready. Not only military professionals, but even laymen understand that the results of battles are largely dependent on powerful tanks. What has happened? Why the leaders of the Ministry of Defense and General Staff decided that only a half of the existing tanks would be sufficient? Maybe we are missing something and tanks became outdated, giving way to “higher” strategic ideas and tactics that eliminate Russia’s need in multi-thousand armored armada. Or maybe there are no military threats that would require tanks?

We asked professional for an explanation.

“Even during the extreme reduction of the nearly 5-million-strong Army after the collapse of the USSR, the Russian General Staff tried to preserve tank divisions in reasonable proportions. They made an attempt to bring their structure in compliance with new military threats. In 2001, the discussion of the sixth generation warfare and post-nuclear wars (fortunately, nuclear wars have not happened, although could have) was started and is still going on.

"There was an opinion that in the majority of cases, it would be sufficient to destroy the enemy’s infrastructure with precision-guided weapons, which would defeat the enemy. They said that deployment of tanks and other armor under such conditions would lose any sense. The innovative theoreticians believed that tanks could still be used to support foot troops in the field and strengthen the troops during breakthrough operations.

"Contemporary Russian reformers have probably set a goal of creating an army on the cheap. Yet, they did not have enough courage to eliminate all the tanks and tank brigades were left in the army, as well as tank battalions of motorized infantry, spread out all over the country. However, one brigade will be stationed in the Moscow military district, and another one in the Siberian. It does not really matter, and it would not matter if they had two brigades in the west and two in the east. There is a legitimate question: how does the General Staff intend to protect Russian Far East with only two tank brigades behind the Urals?

"If we take a peek across the border, at China, we will see that their foot division has 113 tanks, more than Russian tank brigades. Chinese tank division has 240 tanks (China has nine of those, not including 12 tank brigades with 105 tanks each). Right now six foot divisions and two tank divisions are located at the Russian border. This is more than 1,158 tanks in total. Even if we get all Russian tanks together in that region, China would still have 10 times more tanks. In the Central European scene of operations, NATO has over 4,200 tanks. After the reduction, Russia will experience a five-fold decrease in the number of tanks. This is inconceivable logic. “

“Let’s think about it. So, let’s assume that the “new” Russian Army will have 10,000 tanks. How are they distributed?

The rest of the tanks are in coastal defense troops and are used for coastal defense, so we will not consider them. What are these ground forces capable of? We know that battalion is a main tactical unit. In defense (we are not going to attack anyone, right?) it protects a front of 3-5 kilometers. Tanks are provided for motorized infantry to enhance the defense, and one tank squadron is left in reserve. Gaps between the battalions are up to one kilometer. This gives us 35 brigades with 3 motorized infantry battalions each, and 117 battalions can cover a front of 450 to 700 kilometers. This is if they are formed side by side. In this case, tank brigades function as reserves for counterstrike on a front up to 10 kilometers wide.

In the west, the front line is approximately 500 kilometers (along the former USSR border from the Baltic countries to Ukraine), and NATO would have a two-to-one tank advantage at the very minimum (not including the US tanks). Russia should have not 2 or 3 tanks per kilometer there, but twice as many. In the Far East, where we would have to defend ourselves along the front of 2,700 kilometers in nearly complete absence of communications for a maneuver, will 800 tanks be enough?”