After several months of silence, Garry Kasparov, leader of The United Civil Front in Russia, returned to the pages of The Wall Street Journal with the article The U. S. Goes Wobbly on Russia. In his article he blames the USA for its unwillingness to rigidly criticize the modern Russia. At the same time, the tone of the article poses a question: was the article written by a Russian or an American? 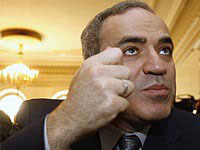 Kasparov wrote his last column as a WSJ contributing editor a few months ago. He then disappeared from the columnists list and was replaced by his fellow party member Boris Nemtsov. Yet, Nemtsov’s column did not work out very well and most likely, Kasparov was invited back to the front of ideological struggle. Meanwhile, he lost his interest in Russian politics and exchanged his old New York apartment for a larger one in a more fashionable neighborhood. This brought changes in the tone of his column. Garry Kasparov does no longer limit himself with hints at the possibility of US interference with Russia’s political life, but openly blames the US President for lack of action.

“Mr. Obama's speech in Russia last July raised expectations that his administration would look at the Kremlin's record of brutality at home and transgressions abroad and attempt to ally itself with the beleaguered Russian people.” He then made a statement that was not promising for him and a number of other members of the opposition: "Instead of lines in the sand we have had words in the air.” The former chess player expressed his extreme dissatisfaction with the results of the first meeting of the U.S.- Russia Bilateral Presidential Commission's Civil Society Working Group. Russia was represented at the meeting by Russian presidential first deputy Vladislav Surkov.

“Prime Minister Vladimir Putin's functionaries are happy to pass the time in the world's capitals being treated as equals instead of being berated for rigging elections and shamed for the growing list of dead Russian opposition figures. But why should the U.S. provide credentials of legitimacy and good faith to such people?” asked Kasparov, stating that Russia has much more deserving people who could act as the ambassadors of democracy.

For example, the employees of the Institute for Modern Development who recently released a report “full of liberalization ideas, from returning to the election of regional governors to the employment of a multiparty framework and even eventual membership in the European Union.” However, Kasparov believes that these ideas will hardly likely be accepted by the existing government because “Mr. Putin will make any decision he likes," Kasparov quotes the institute's head, Igor Yurgens. If Barack Obama and the US in general were more decisive in their actions towards Russia, the situation would be different.

Kasparov is not original in his ideas. He said something similar before, when he suggested that Western countries should help the development of Russian democracy through the introduction of economic sanctions against Russia and NATO expansion to the East. First, this time, Kasparov refers to the “health” of the democratic power represented by the Russian President advisory council whose activity is allegedly hindered by the Prime Minister. Second, he addresses not so much the US President but the Americans in general trying to convince them that the actions of Russian officials pose the same threat to them as Middle East terrorists.

“Massive U.S. borrowing, and the false sense of liquidity it produces, is currently all that is supporting large swaths of the debt-ridden Russian economy by providing cheap credit to the overextended oligarchs. Mr. Putin's cronies and other leaders sitting on failed economies benefit as America continues to move from Keynesian to Ponzian economics, desperate to postpone the inevitable reckoning. Runaway inflation in the U.S. is being put off because dollars are making their way out of the country—not by creating jobs or industry, but by boosting gains in the speculative stock and currency markets,” Kasparov says.

“The Obama administration seems to be engaged in an endless campaign to make people believe these problems can and will be solved eventually instead of taking the tough steps required to solve them. It is true that doing what must be done can be a thankless task and that telling the truth does not always poll well. But promises are for candidates. Fulfilling promises is for leaders,” Kasparov concludes.

Is Mr. Garry Kasparov Russian or American? – wonders a reader of The Wall Street Journal. This reader thinks it is a shame that a frustrated Russian politician is trying to teach the American government and the people what they should do. A reader who calls himself Omoge Ediho commented that the American political system did need some changes, but Mr. Kasparov should have kept his advice to himself.

Earlier Kasparov’s activity in the American media surprisingly coincided with growth of financial well-being of Russian opposition that received an additional stimulus for its political activity. At the moment, certain members of the hibernating party The United Civil Front in Russia suddenly start participating in the protests all over Russia. Interestingly enough, they participate in all kinds of protests, including a protest against the introduction of new traffic tax in Kaliningrad and meeting of environmental activists in Irkutsk.

It looks like some political forces have started unofficial preparation for 2012 Presidential Election. It is not yet clear what tactics the opposition would choose this time. Most likely, it would place bets on the opposition of the President and Prime Minister as well as attempts to interfere with voting. At least, only under conditions of chaos and destabilization the weak and unsupported Russian opposition will be able to get into the legal political field. Who knows, maybe foreign countries will help.