The Russian economy has been having dizzy ups and downs during the recent years, which made an author of French Le Figaro newspaper compare it to the yo-yo toy. It had a six-percent growth in 2008 and dropped by 7.9 percent in 2009. The main reason for such a fluctuation is Russia’s dependence on raw materials, presumably crude and natural gas. 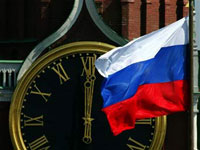 A 20-dollar drop in the price on one barrel of oil triggers a 4-percent reduction for the Russian GDP, Natixis’s Francois Theret told the newspaper. A slide in prices on Urals oil from $243 per barrel in July 2008 to $32 in December resulted in the avalanche-like distribution of the economic crisis in Russia during the first half of 2009.

The author of the article also whore that Russia has huge volumes of external borrowings, which the nation’s corporations made during the pre-crisis years.

Russia successfully avoided an economic disaster, though. The basic part of the economic infrastructure and the banking system of the nation were preserved. The crisis, Le Figaro wrote, made the Russian administration take active measures to retrieve home demand and develop technological branches of the industry.

Mattieu Belongrade, another spokesman for Natixis (a French corporate and investment bank) believes that Russia is about 50 years behind developed countries when it comes to the diversification of economy. Unfortunately, it is true.

One should bear in mind the fact that the raw-material economy is the simplest variant under the conditions when a considerable part of material resources is concentrated in the hands of state and semi-state corporations controlled by a narrow circle of political figures. A more complicated and innovative model, which requires market expansion and development of competition, threatens their monopoly.

Many of such structures have serious problems with their own management, which leaves them no chances in the world of modern companies with adequate level of management. Attempts to either create new or copy someone else’s technologies usually end with a failure. One may recollect the story of the Russian Superjet airliner built with the use of foreign-made parts. The plane was morally outdated before its serial production was finally launched.

It would be good for Russia to follow China’s example – to import and adapt the technologies that already exist.