Russian fifth generation aircraft prepares for its maiden flight. The test flight will reportedly take place on January 28 or January 29 at the air base in the city of Komsomolsk-on-Amur, Interfax news agency reports. 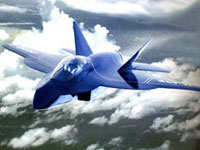 “A very important event in the history of the Russian aircraft-making is about to take place. First runs showed very good results. We decided to conduct the first flight here, not in Moscow,” Vyacheslav Shport, the governor of Russia’s Khabarovsk region said.

Only a few people – designers, engineers and test pilots - have seen the new Russian fighter so far. It was said, however, that the plane would develop the speed of 2,100 km/h and fly at the distance of up to 5,500 kilometers.

The first runs of the new fifth generation fighter jet took place in December of 2009 in Komsomolsk-on-Amur.

The new plane, known as T-50 or PAK FA, was developed by Sukhoi design bureau. The date of the maiden flight has been changed several times. Vice Premier Sergey Ivanov said in December 2009 that the new jet would take off before the end of the year. Afterwards, it was said that the tests had been pushed back to early 2010, but the date had not been exposed, Itar-Tass said.

The current prototype is Sukhoi's T-50 is intended to replace the MiG-29 Fulcrum and Su-27 Flanker in the Russian inventory. A fifth generation jet fighter, it is designed to directly compete with the American F-22 Raptor and F-35 Lightning II.

The new jet will be able to take off and land on short runways, 300-400 meters long. The fifth generation aircraft will fly at large distances with multiple refueling in the air.

The PAK FA will use on its first flights 2 Saturn 117S engines (about 14.5 tons of thrust each). The 117S is an advanced version of the AL-31F, but built with the experience gained in the AL-41F program. The Saturn AL-41F powered the Mikoyan MFI fighter (Project/Article 1.44). Later versions of the PAK FA will use a completely new engine (17.5 tons of thrust each), developed by NPO Saturn or FGUP MMPP Salyut.

Russia’s Air Force will have the new fighter jet in 2015. India’s Defense Ministry already plans to purchase 250 such planes from Sukhoi.