The Georgian Conflict Seen by Russians

We all know what the West thought about the 5-day Georgian War in the Summer of 2008 because reputable media outlets suddenly transformed themselves into peddlers of cheap propaganda without an iota of truth. We present a series of views in essays issued by the Russian Center of Analysis of Strategies and Technologies in Moscow. What really happened in the Caucasus? 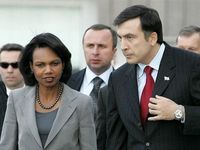 The Georgian Conflict Seen by Russians

In these essays, three things are clear: Firstly, the discrepancy between the USA’s training Georgian elements for counter-insurgency actions in the war against terror and the Saakashvili regime’s policy of rearmament for a military assault to retake South Ossetia and Abkhazia. To what extent was the Bush regime aware of this?

Secondly, the poor planning and strategic failure from the part of the Georgians, who lost the initiative even before dawn had broken on August 8 th.

Finally, the fact that Russia only recognized the independence of South Ossetia and Abkhazia when it became clear that Saakashvili had no intention of approaching the question from the viewpoint of a negotiated international settlement (which was Georgia’s obligation under the terms of the Soviet Constitution in the event of the voluntary dissolution of the Union).

Anton Lavrov ’s essay details the events running up to the conflict. After days of escalating tensions in the area, Georgia’s President Mikheil Nikolayevich Saakashvili gave the order for a full-scale attack at 14.30 on August 7, 2008. After failing to gain any ground with his assault using tanks, rockets and self-propelled artillery, he ordered a unilateral ceasefire, on TV, in the evening. During this time, 12,000 Georgian Defense Ministry and Interior Ministry troops massed outside Tskhinval (South Ossetia’s capital) and at 23.30, received the order to attack again, under cover of the ceasefire, to seize the Roki Tunnel and cut the main Trans-Caucasus highway.

However, the Russian General Staff had long had suspicions about Saakashvili’s intentions and had stationed two battalions of motorized infantry poised to move in to the vicinity of the tunnel as a rapid reaction force. They received orders to deploy around 03.00 on August 8 after having been issued an order to line up in formation two hours previously. By dawn, the Georgians had neither managed to deploy their special forces units into Tskhinval, nor had they managed to dislodge the Russian forces or stem their advance. The initiative was lost.

The essay by Viacheslav Tseluiko concentrates on the military build-up by Georgia prior to the conflict. Weaponry was procured with the express purpose of retaking South Ossetia and Abkhazia and in his point of view, the Georgian Armed Forces had surpassed the capacities of the defense forces in these two territories, while the best Georgian unit, the 1 st Infantry Brigade, was deployed in Iraq and the best military unit in the region was Russia’s 4 th Army in the North Caucasus Military District.

The countries which supplied Georgia were Ukraine, the Czech Republic, Bulgaria, Bosnia-Herzegovina, Uzbekhistan, Turkey, Greece, Israel and the United States of America.

Finally, the essay written by Russian Foreign Minister Sergei Lavrov explains the diplomatic aftermath of the conflict, in which Russia suggested that an international conference be held in Geneva while the details of the Medvedev-Sarkozy plan were being drawn up, that this should cover both security issues and also the status of South Ossetia and Abkhazia (since this had never been approached by Georgia despite it being clearly stipulated in the Soviet Constitution that Tblisi was to hold referenda in these territories in the event of a dissolution of the Union).

After Georgia’s aggression was suppressed, Sergei Lavrov states, Russia suggested that the future status of these two territories should be discussed under an international format, this proving at that time that Russia had no intention whatsoever to occupy these regions or indeed to unilaterally recognize their independence.

It was the repeated statements by Saakashvili that he would refuse to discuss Sukhum or Tskhinval under an international format and that the territorial integrity of Georgia would be restored which made it plain that Georgia was once again planning further military incursions and acts of aggression and therefore to protect their peoples against extermination, Russia had decided on the course of action which it followed.

Humanitarian concerns, yes. Military aggression, no. The aggressor from the outset was Georgia.