Putin Named Best Ruler of Russia Since Peter the Great

Ross Cameron, a former deputy of the Australian Parliament, published an article on The Sydney Morning Herald about Putin’s ten years in Russia’s big politics after the moment when Boris Yeltsin handed the reins of power to him. 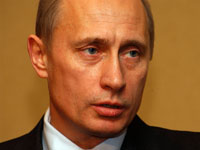 Putin Named Best Ruler of Russia Since Peter the Great

“It was a good day for Russia and the world. Putin is Russia's finest leader since Peter the Great,” the Australian politician wrote.

Mr. Cameron believes that the West wrongly emphasizes the fact that Putin is a former KGB agent.

“As a spy in West Germany in the 1980s, Putin witnessed the superiority of the free market. After the 1989 revolutions, Putin moved to St Petersburg to join his friend and former university lecturer, the mayor, Anatoly Sobchak - the Milton Friedman of Russia - and was appointed to attract foreign investment to Russia's second largest city. When Yeltsin defied Soviet tanks in Moscow in 1991, Sobchak performed the same heroic feat in St Petersburg. During those momentous days, when Russia's fate was in the balance, Putin resigned from the KGB to work against the Soviet coup,” Cameron wrote for The Sydney Morning Herald.

Putin has earned highest ratings possible among all political leaders of the democratic world, a former federal MP believes. Putin headed Russia at the time when the nation was standing on the brink of the economic collapse, but he managed to double the nation’s GDP and pay off the foreign debt ahead of schedule.

“The power of oligarchs diminished under Putin, with the growing counterweight of parliament, the rule of law and a middle class that has exploded from 8 million to 55 million. Those living in poverty fell from 30 per cent to 14 per cent under his watch,” Cameron said.

The Australian politician also praised Putin for wearing a cross, studying the Bible and restoring the prestige of the Russian Orthodox Church.

“Russia is the largest geographic nation and the ninth most populous. It retains the largest stockpile of weapons of mass destruction. Everyone on Earth has an interest in Russia's stability and prosperity. It seems likely that Putin will stand again for president in 2012, as the constitution permits. In view of his extraordinary record of achievement in office, it’s hard for me to see how anyone of good faith could regret his continued influence in Russia and the world,” Ross Cameron concluded.

Putin takes a strong lead on the Russian rating of most prominent politicians of 2009. The majority of Russians support Putin and his political course. The sitting prime minister enjoyed the highest rating in 2007 – 82.1%, when he was the president.