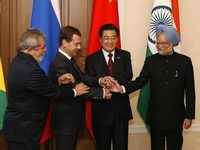 The year 2009 was particularly symbolic for Russian foreign policy in terms of bilateral relations between Russia and the U.S., with the new recent American foreign policy of antagonism with the question of Iran's nuclear program and the establishment of the missile shield in Poland and Czech Republic regressed considerably. With the retreat of the U.S. establishment on these measures, relations between the two nations could have a more positive impact to decrease the tension in Europe over the continuing diplomatic confrontations between Americans and Russians.

In addition to that is the issue of the rationing of gas for Ukraine because of the violation by the Ukrainian side of gas pipelines to their country and the conflict with Russia about Georgia and the territorial integrity and defense of South Ossetia, leading Western speculators question these positions as a resurgence of the Cold War with the U.S. However, Russia through the management of Dmitry Medvedev, has shown that in fact Ukraine deviated the gas into its territory and that Georgia committed acts of violation of human rights in the massacre of the population of South Ossetia and Abkhazia, a fact that was evidenced by the UN.

The U.S. realized that its image internationally was very worn by the Bush administration and of course to restore their previous credibility in the international system, Obama had to restructure the dynamics of relations with other nations in order to re-legitimize their actions and re-establish their reputation in this regard in order to resume positive dialogue with Russia related to the incapacity of the U.S.A. Failure to criticize the action of Russia in defending the Ossetian people, characterizes this rapprochement between the two nations.

For 2010 Russia's external policy has maintained practically the same priority as that of the previous years, namely as regards its economic restructuring and modernization of its financial system, which strengthened the Russian national identity. Another important factor has been first priority given towards maintaining good relations and dynamics among the CIS countries, principally Kazakhstan and Belarus.

Regional security and questions relating to the Caucasus are also among the priorities quite apart from the recognition of the status of independence of South Ossetia and Abkhazia. The USA comes in as second priority for natural reasons, being the great political rival and economic partner as well as sharing strategic issues in Eurasia and the Middle East.

China is in third place in terms of Moscow's strategy and the strategic partnership is the main thread of this relationship. The EU comes next, Germany and the Netherlands being mainstays of the Russia-Europe relationship. In fifth place in the Middle East, with pride of place going to Iran and the positions of the USA in Iraq and Afghanistan, where Russia participates in the dialog towards peace, financing and observation of the Iranian nuclear program.

Brazil is in first place in the relationship with Russia among Latin Americans, however the relationship continues with some political will for development, but little practical progress in the first quarter of 2009. Transactions between Brazil and Russia had a bilateral trade of USD 742 million, 48% below the same period of 2008, the surplus in 2009 was favorable to Brazil in USD 380 million. For Brazil, Russia is in 16th place of destination of its exports to Russia, Brazil is in 31st place.

The agenda of the products traded between the two nations remained largely unchanged. Brazilian imports from Russia were 65.7% for manufactured goods to be manufactured or manufactured goods and 34.3% in staples such as electronics and chemicals, already Russia concentrates 31% in total beef, 24% in raw sugar, 16% in fresh pork, 6% in chicken and 5% in tractors. (source-Secex MDIC).

In 2010, the Brazilian government seeks to boost the flow of foreign trade to 10 billion USD against $ 8 billion in 2008. The political and cultural relations will continue to develop mainly due to the performance of BRIC countries in the international arena.