Boris Berezovsky documents seized in Brazil will be delivered to Russia 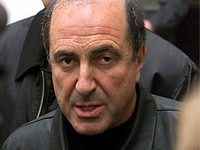 Minister Celso de Mello, of the Supreme Court, confirmed the decision that authorized federal courts to deliver justice to Russia which are documents and equipment of Boris Abramovich Berezovsky seized in Brazil in 2006.

A partner of Media Sports Investment (MSI) in the Sport Club Corinthians Paulista 2004 to 2007, Boris Berezovsky is accused of the crimes of money laundering and conspiracy in Brazil which is also being investigated in Russia.

Boris Berezovsky's defense attorney filed a Habeas Corpus in the Supreme Court to try to prevent the delivery of the documents and computers seized from the businessman to Russian authorities. The order to deliver the documents and equipment came from Judge Fausto de Sanctis, of the 6th Federal Vara of São Paulo, at the behest of the Prosecutor of the Russian Federation.

Boris Berezovsky's lawyers argued that the order for delivery of the equipment could not start from a federal judge in the first instance, but the Superior Court of Justice under Article 105, item I, letter "i" of the Brazilian Constitution, which deals with approval of foreign judgments and granting enforcement to request letters.

Against the order of Judge Fausto de Sanctis, Boris Berezovsky's defense filed a complaint in Superior Court, alleging usurpation of jurisdiction of that Court to decide on international cooperation.

In addition to the usurpation of power from the Supreme Court to rule on compliance with requests for international cooperation, the defense also alleged illegal constraint, invasion of privacy, absence of citation of the businessman about the decision and the reasons for collecting the equipment and violations the constitutional principles of natural judgment, of the broad legal defense and the contradictory.

The reporter granted a preliminary injunction forbidding the enforcement of the Federal Court of Sao Paulo, but the collegiate STJ dismissed the unjustified complaint, overturned the injunction and upheld the decision of Judge Fausto de Sanctis, who ordered the delivery of the laptops to Russian authorities.

In questioning this decision in the Supreme Court, the defense of the businessman alleged illegal constraint, invasion of privacy and lack of citation on the decision. The lawyers of Boris Berezovsky asked, too, through habeas corpus, that the Russian embassy did not refer the evidence to the Russian authorities.

But the minister Celso de Mello denied the injunction, claiming that the Supreme Court of Brazil cannot order foreign diplomatic missions to submit to their jurisdiction. He explained that despite the unlimited character of the exercise of jurisdiction, it is governed by the principle of territoriality, which means that there are "situations, individuals, agencies or institutions immune to the impact of judicial magistrates and the Brazilian courts."

According to the minister, "power passes away, for the Supreme Court to be able to impose to any foreign diplomatic legation in our country, the fulfillment of determinations issued by this Court having in mind the relevant fact that they are not subject, as a rule, except in specific situations, to the jurisdiction of the Brazilian state.

Minister Celso de Mello denied the injunction on the ground that the Supreme Court cannot order foreign diplomatic missions to submit to their jurisdiction. He explained that although the character limit for the exercise of jurisdiction is governed by the principle of territoriality, means that "there are situations, individuals, agencies or institutions immune to the impact of judicial magistrates and the Brazilian courts."