In October 2009, Nicolai Patrushev, Russia’s Security Council Secretary, announced that the new military doctrine was on its way. The old one was dated back in 2000 and written even earlier, under Yeltsin. Patrushev named the announcement of Russia’s right for a preventive nuclear strike the key provision of the new doctrine. He kept his word, and this provision does exist in the text of the doctrine approved by the Security Council. The President of Russia is expected to sign the document by the end of the year. Experts believe that the doctrine is fair and properly reflects the current state of affairs. 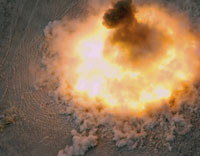 The document’s preamble informs that the new doctrine is the “document of the period of Russia’s revival,” while the old document talked about the “transitional period.” This way we can find out what Russia’s government sees as the country’s revival.

The main thesis of the document: the world is organized according to the multipolar principle; therefore a possibility of a large-scale military conflict with regular and nuclear weapons against the Russian Federation is reduced.

Indeed, in the contemporary world, a military threat is more acute in the event of bipolar relations, e.g., the Caribbean Crisis or conflicts between the giants on the territories of other countries. On the other hand, World War II was waged in multipolar world (Germany and allies; England and France; the USSR; the USA) and led to the bipolar one. This means that the Russian strategy is based on a quite arguable thesis.

Therefore, Russia now announced its right to use nuclear weapons not only in case of aggression against itself, but also as a “response to a threat of using (or usage) against itself and (or) its allies of nuclear or other weapons of mass destruction, as well as a response to the aggression with regular weapons in the situations critical for the Russian Federation. “

The similar document signed by the United States does not have this provision. The US does not consider itself entitled to use nuclear weapons as a response to a “threat.” Unfortunately, their arguments do not work in the situation with Russia, since Russia’s neighbors differ greatly from the US’s neighbors. Instead of hyper-loyal Mexico and Canada, Russia has uncompromising China in the south-east, revengeful ex-allies in the west, and small, but very proud revenge-seekers in the south. God bless Kazakhstan covering Russia from unpredictable Central Asia and filtering Afghan drug trafficking. Yet, this “safety blanket” should be somehow protected as well. The red button in the Kremlin is capable of cooling hot heads nearly anywhere in the world.

As for regular weapons, everything stays the same. By 2015, 30% of the army should be equipped with brand new equipment, and in 2020 this number will reach 70%. This is at least realistic. General draft service will remain the same, while soldiers and officers determining tactical efficiency would have to be staffed with contractors only. The doctrine does not discuss mass military conflicts, it is defensive and restraining. Even the most adamant ill-wishers of Russia will not be able to find aggressive intentions in this document.

Russia does not have resources for aggression. Even Pavel Felgenhauer, a Moscow-based defense analyst said in his interview with Gazeta.ru that he was pessimistic about the condition of Russian military: “The weaker the army, the more important nuclear weapons are. We don’t have anything left besides our nuclear weapons. We have no guarantees that the West would not interfere with our wars, like it happened with Georgia, therefore, we do need nuclear restraining. The new doctrine just documented the real state of affairs.” Nuclear weapons remain the main, and maybe, the only defense for Russia. It would be silly to walk around the area filled with stray dogs without an electroshock or at least a good stick.