US Strongly Determined To Keep Control over Russian Nuclear Missiles

The USA is not concerned about the lingering strategic arms reduction talks with Russia. The US administration has confirmed its intention to sign a new treaty with Russia as soon as possible. However, it is not going to happen before the end of this year, as was originally planned. 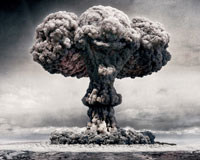 US Strongly Determined To Keep Control over Russian Nuclear Missiles

The previous START Treaty expired on December 5. Moscow and Washington were supposed to cut their nuclear arsenals from 10,000 to 6,000 nukes for each party. The two countries were supposed to sign the new treaty by December 5. The talks continued for months, but it became impossible to meet the deadline, RIA Novosti reports

The date when the Russian and the American presidents sign the new document remains unknown. The USA is not ready to weaken its control over Russian missiles. Many experts believe that the reset of US-Russian relations is simply an official declaration.

The United States has not been conducting nuclear tests since the beginning of the new century. However, the nation continues to control Russian missiles, because a missile transmits open information about its flight in accordance with the START-1 Treaty.

Officials of the Russian delegation in the talks said that the US was planning to sign the new document in January of 2010, but the process may take a lot longer.