Russia's festive holiday fir tree for the New Year and Christmas holidays, which will adorn Cathedral Square in Moscow's Kremlin, is more than a century old and is 28 meters high. It comes from a forest near the town of Mozhaisk, planted about 103 years ago. A special committee was set up back in September to choose the perfect one for the occasion from among hundreds of trees in Moscow forests. 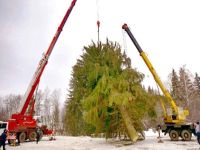 An elaborate ceremony was held with traditional Russian entertainment shows, including Grandfather Frost – the Russian version of Santa Claus. Many other wonderful, colorful characters were also present at the ceremony.

The Russian Santa Claus is called Ded Moroz. “Ded Moroz” translates to “Grandfather Frost” in English. He is unmistakably Russian in appearance and attitude. He is typically shown in a long, Russian-style coat in the colors of red, icy blue, silver, gold, or another color appropriate to the season, which is lined or trimmed with white fur.

Ded Moroz wears a rounded Russian cap trimmed with fur. His clothing is richly decorated with embroidery. Traditionally shown as a tall and slender older gentleman, Ded Moroz cuts an elegant figure on Christmas cards wishing the receiver Happy New Year. Ded Moroz carries a staff and wears a long white beard. He protects his feet from the cold by tall valenki or leather boots. The three horses of the Russian troika offer enough power and speed to get Ded Moroz to where he needs to go – the Russian Santa has no need for any reindeer!

Ded Moroz delivers gifts on New Year's Eve rather than on Christmas Eve. He is accompanied by Snegurochka, the Snow Maiden. In the legend of Ded Moroz, she is said to be his granddaughter. Instead of the North Pole, the Russian Santa Claus officially makes his home at an estate in the Russian town of Veliky Ustyug. Children can write their letters to Ded Moroz and send them to Veliky Ustyug in hopes of having their holiday wishes granted. Those who visit Veliky Ustyug can have their photo take with Ded Moroz, ride in a troika, and enjoy wintertime activities.

The tree arrived in the Kremlin on Saturday. It entered through the Spasskiye Gates that opens only once in four years: that is on Russian president's inauguration day. The tree will be mounted on a pedestal and some 2000 decorative items of all sorts – ribbons, Christmas balls and bells – will adorn the tree. A kilometer-long sash, painted with the colors of the Russian flag, will festoon the giant festive tree.

The longtime tradition of having a New Year tree dates back to the 18th Century. Russian Emperor Peter the Great was touring Europe as a young man, and there he picked up the tradition of having a Christmas tree. He adopted it in his country, which was then a religious Orthodox one, and in which Christmas was the main holiday. Then everyone started to have the trees in their homes for the holidays.