Russia Asked to Cover NATO’s Back

Why is it that NATO makes and breaks promises to Russia, encircles Russia by arming regimes which are hostile to Moscow after promising not to, and then asks for Russia’s help when it gets itself into trouble? 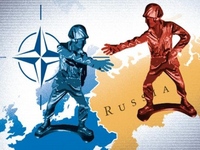 Russia Asked to Cover NATO’s Back

The fact that NATO Secretary-General Anders Fogh Rasmussen is to meet President Dmitry
Medvedev, Premier Vladimir Putin, Foreign Minister Sergei Lavrov, Sergei Mironov of the Federation Council, and Boris Gryzlov of the Duma shows the importance of his visit to Moscow.

On the table is apparently the subject of logistical support for NATO operations in Afghanistan, where after 8 years, casualties are at record levels and vast swathes of the country are under permanent control of the Taliban at a total cost to date of $231,596,444,845, or two hundred and thirty-one point five billion dollars, where Hamid Karzai’s government resembles a gaggle of gangsters and where ten per cent of the Pentagon’s spending is paid to fund the Taliban not to attack.

This, after NATO itself, albeit indirectly, created the problem in the first place by unleashing extremist terrorist movements in central Asia to destabilise the Soviet Union, among which were the Mujaheddin movement, complete with Mullah Omar and Osama bin Laden, which morphed into today’s Taliban. Payback time was 9/11.

So after promising Russia time and again that NATO would not expand eastwards if the Warsaw Pact were to be dismantled, then promptly placing its hand round Russia’s throat with NATO presence along the northern and western borders, and then courting Georgia, whose regime launched a criminal and murderous savage cowardly and under-handed attack against Russia last Summer, Russia is now expected to help.

Given that Russia’s government and Russia’s position in the international community have historically adopted a sensible, balanced and correct reading of scenarios (it was after all right to support the socially progressive government in Afghanistan against the terrorist movements, just as NATO is doing today) it makes sense for Russia to help NATO by providing logistic support. Nobody gains by Afghanistan becoming a failed state again, although the notion remains that its people would far better off if the country had been left alone with its Government back in the 1970s.

Nobody gains either by international terrorism having any places to hide and develop, for the tragedy and horror of what happened in New York, London and Madrid and recently, Moscow, show that it is not just a fight between the USA and bin Laden but indeed civilization itself against a bunch of murderers.

Neither is Russia in any way hostile to NATO’s campaign in Afghanistan. After all it is only right that NATO finishes the job it started back in the 1970s, although 15.000 Soviet lives were lost in the balance.

So NATO would do well to thank Russia for its support not only in Afghanistan but in other areas, namely combating piracy and trafficking and would do well in future to keep its word, not make hostile advances and not openly support regimes such as Saakashvili’s Georgia.

The key to all of these issues (except Georgia, where “No Saakashvili, No problem” would be the order of the day) is development and this requires money, patience and time. It also requires a world whose leaders and those who keep them in power are more focussed on solving common problems than in making personal gains. The world can only gain by coming together, with old foes becoming friends, with the international community living in friendship around our common lake, the seas. Tears taste of salt, whoever sheds them.