A strange light phenomenon could be observed in the sky above Norway on Wednesday morning. Some people thought that it was a UFO, but local media later said that it was the consequence of a Russian rocket launch. Indeed, Russia attempted to conduct another test of its new Bulava intercontinental missile. The 13th attempt ended with a failure again, the Vedomosti newspaper wrote with reference to a source at the Russian defense industry. 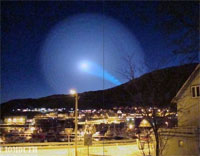 A malfunction occurred during the separation of the third stage. The launch can therefore be considered as successful, since it was the first stage that malfunctioned during the previous launches, the source said.

A source of the Kommersant newspaper confirmed the information. Russia released an official warning last week to inform other countries of the intention to conduct missile launches in the southern part of the White Sea during December 7-14. One of the indicated time intervals coincided with the appearance of the UFO in the sky above Norway on December 9.

In addition, it was said that Russia’s Dmitry Donskoy submarine, from which Bulava tests are conducted, went to sea for shooting practice.

Residents of the north of Norway witnessed an unusual phenomenon early in the morning on Wednesday, December 9: a huge shining spiral appeared in the sky above the town of Tromso. Local newspapers quickly wrote that the spiral was most likely caused with a failed launch of a Russian rocket, most likely a Bulava.

The shining spot appeared above a mountain. Eyewitnesses took pictures of the phenomenon. The spot, as they said, was larger than the Moon.

Preparations to the most recent launch began in the summer of 2009, after the unsuccessful result of the previous launch.

The Russian military developed Bulava to possess advanced defense capabilities making it nearly impervious to existing and future missile-defense systems. Among its claimed abilities are evasive maneuvering, mid-course countermeasures and decoys and a warhead fully shielded against both physical and Electromagnetic pulse damage. The Bulava is designed to be capable of surviving a nuclear blast at a minimum distance of 500 meters. Prime minister Putin has claimed that Bulava could penetrate any potential anti-missile defense system.

The Bulava is able to carry up to 6-10 MIRV warheads with a yield of 100-150 kT each. A full-capacity payload requires the forfeiture of all final stage countermeasures and of some shielding.