There are 130 victims hospitalized, 88 in serious condition after a fire broke out during an indoor fireworks display at the Lame House Night Club in Perm. It was 1:00 a.m. local time when the suspended ceiling caught fire, causing the power to go out. Panic ensued resulting in a stampede towards the one and only exit. 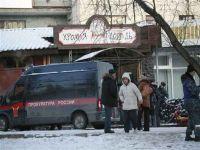 Of the victims still alive, 88 are in serious condition with 59 persons requiring the use of ventilators to breathe. Most victims have severe burns. Many who died were crushed in the stampede. Others were overcome by carbon monoxide. The bodies of 34 have been identified.

The owners and managers of the club, Anatoly Zak and Svetlana Yefremova, have been arrested. They face jail terms of up to seven years. Four other suspects are wanted in the case. President Medvedev said those running the club were guilty of gross negligence, and called for harsh punishments.

The club's website before going offline showed a party for that very night marking "the birthday of our favorite club", saying "guests dressed as new-born babies would be admitted free until midnight." It is difficult to believe that a public establishment would not be fire proofed for such indoor displays if indeed having such displays indoors should be done at all. It seems like a certain recipe for disaster.