Childish and stereotyped reporting in the Times newspaper online, once again following a russophobic approach evocative of the Cold War, needs to be answered once and for all. It is time these western media outlets started being more responsible, more professional and more interesting. 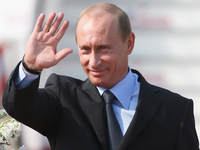 Open the Times, or any of its competitors in the English language on either side of the Atlantic and browse for the word Russia, Kremlin or Putin, and what do you get? A time trip back thirty years, complete with phrases such as “Stalin sent millions to their deaths”, the “dictator is closer to rehabilitation”, “Putin the former KGB agent” and so on.

Death, dictator, KGB. Three catch-words used time and again when Russia is described. And now, Stalin the mass murderer and dictator, linked to the figure of Russia’s Prime Minister, Vladimir Putin. How? Because Vladimir Putin was courageous enough to address this very issue in a mature way in his televised address to the nation this week.

True to form, the Times, just like any other renowned western media outlet, reported half of the story, and badly. Vladimir Putin included Stalin in his address because it is a real issue, it is part of modern Russia coming to terms with itself. This process inevitably has to pass by analysing and digesting its history, facing the bad and the good.

Vladimir Putin was careful to point out that the style of Josef Vissarionovich Djugashvili (Stalin) was unacceptable, he was careful to admit that millions of citizens lost their lives in a period of repression. However, he was also perspicacious and courageous enough to remember that Stalin built the Soviet Union, inheriting a medieval backwater and transforming it into a front line superpower in just a few decades, instituting a program of industrilization which created millions of jobs, educating his people, creating an admirable healthcare system, public transportation, free housing, zero unemployment, free distribution of certain foodstuffs, free public utilities…both in Russia, in the Soviet Union and increasingly, exported around the world, freeing most of Africa from imperialist and colonial evils…after having come through a bloody civil war and the Great Patriotic War, in which 90 per cent of Wehrmacht casualties were incurred on the eastern front.

So evidently, Stalin had positive aspects, and many of them – and evidently, why should Russians today be ashamed of the Soviet Union? When Stalin was fighting Hitler, he was praised in the UK and affectionately called “Uncle Joe”.

To label Vladimir Putin as anything less than a visionary public figure is totally wrong and becomes any media outlet that purports to being serious extremely badly. Vladimir Putin is perhaps the most popular democratically elected political figure in the globe at present. What the Times did in their biased reporting was quote half of what Russia’s Prime Minister said, twist it and create an illusion which serves the interests of those who wish to perpetuate the Cold War because they are controlled by the Arms Lobby, NATO, that unelected greyish supra-national organism which dictates foreign policy.

It is so easy for some to cast stones, yet how blind they are to reality. The Times mentioned Stalin’s purges, as indeed Vladimir Putin did. One must remember what Stalin created, one must remember Stalin’s victory in defeating Facsism, Racism and Anti-Semitism, one must remember that Stalin was fighting constantly against states which were spending trillions of USD to sabotage his model. And after the Civil War, who would trust anybody? Indeed, Eltsin trusted the West in the 1990s and look what happened!

NATO lied through its teeth and US economic advisors did to Russia’s economy what they did to their girlfriends and clients.

And now we are speaking about history, now that Vladimir Putin has been courageous enough to address a sensitive issue, what about that murdering incompetent drunkard Churchill, who sent thousands to their deaths in Gallipoli? And what about Truman, who authorised the deployment of WMD against civilians in Japan, the most flagrant example of State Terrorism and war crimes the planet has ever witnessed?

No mention of course of the practice of slavery (did Russia carry this out?), no mention of imperialist massacres of course over the centuries. So which country has a “clean” historical sheet? Or does every nation, passing through socio-economic-developmental-societal vectors, not go through one and the same phase over time?

These are the areas which need to be studied and presented to our readers, this is journalism providing a public service, this is responsible and objective coverage of events. What the Times provides is a telling example of the feeble kowtowing which the mainstream western media – russophobic, hysterical, insincere and dishonest – has been reduced to.

Therefore no comment of theirs on Vladimir Putin is fit to even lick his boots.