Medvedev and Putin Won't Elbow Each Other in Two Years

The president and the prime minister of Russia still do not exclude a possibility to participate in the presidential election in 2012. Putin was the first to announce his intention during his marathon performance on television yesterday, December 3. Several hours later, President Medvedev made a similar announcement at a new conference in Rome. 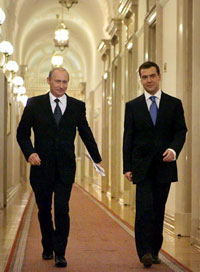 Medvedev and Putin Won't Elbow Each Other in Two Years

Putin mentioned such an opportunity twice during the question-and-answer conference. A man offered Putin to leave big politics and enjoy life, to which Putin responded: “Don’t hold your breath.” Another question, particularly about the election of 2012, followed some time later. Putin said that he would think about the opportunity.

Dmitry Medvedev was in Italy for an official visit the day when Putin was answering people’s questions.

“Premier Putin said that he did not rule out such an opportunity, and neither do I, for myself,” Medvedev told journalists in Rome.

Like Putin, Medvedev supplemented his remarks with a number of abstract clarifications.

“We will be able to agree how not to elbow each other, but to make a reasonable decision for the nation,” Medvedev said.

Many analysts were expecting Medvedev to make a soft statement which would mean that he would be prepared not to stand in Putin’s way. However, it did not happen.

Many observers say that Putin enjoys a wider support among the population – the so-called “Putin’s majority.” “His people” make the majority of Russia’s ruling elite, and, finally, the ruling United Russia party, which he chairs. Therefore, Putin can obviously win the next presidential election even if he competes with Medvedev in the vote.

However, those, who prefer to see the situation this way, miss two factors out of attention. First and foremost, both the prime minister and the president will make their own decisions about the 2012 election. Also, one needs to pay attention to Medvedev’s activities to strengthen his administration. Medvedev expands his administrative authorities. For example, he has recently appointed the new presidium of the State Council, which presumably included the governors, whom the sitting president nominated personally.

Therefore, it is too early to come to any conclusions. Medvedev and Putin are absolutely right about it. They both do not exclude the possibility to run today, but their views may change in 2012. It’s no use for analysts and politicians to guess whom to follow today to be rewarded in two years.