Vladimir Putin interacted with the Russian population in a 4-hour marathon TV show on December 4. It has become a tradition for Putin to hold annual live question-and-answer performances on Russia’s major TV and radio channels. The recent program became his eighth. As usual, people asked a great deal of questions – about 1.5 million. The questions were mostly about the social sphere, although the Russians showed great interest in their nation’s economy too. 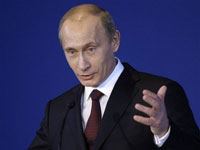 A question about terrorism was one of the first, which the prime minister answered (in light of the recent train crash in Russia).

“We have done a lot to break the spine of terrorism, but the threat has not been removed yet,” Putin said.

The prime minister stressed out that the society would have to realize the threat of terrorism to be able to conduct successful struggle against it.

Putin said that it was possible, albeit very hard to prevent terrorist acts, especially on the objects of infrastructure.

Speaking about the Nevsky Express train crash, Putin said that the tragedy indicated more effort must be taken in the field of anti-terrorist activities.

People also asked Putin about Russia’s law-enforcement agencies. The prime minister stressed out that he would not paint all police officers black. He said that there were over one million people employed at the Internal Affairs Ministry, which is more than the number of personnel of the Russian Armed Forces.

“People execute an important function and sometimes risk their lives not only in hotspots, but in every-day life situations. Unfortunately, there are people there too who violate the law and cause irreparable damage to life and health of our people. This is inadmissible, of course. The society and the internal affairs ministry must struggle against such demonstrations of violence. If people in uniforms break the law, they must be punished strictly for it,” Putin said.

Putin did not support the appeals to recreate the police or dissolve the State Traffic Safety Inspectorate.

“Our friends in Ukraine have had this experience. They dissolved the agency, which we refer to as Traffic Police. Nothing good came out of it: bribes became higher, there is no order on the roads there after the functions were delegated to other agencies that were not prepared for that work,” Putin said.

A resident of the city of Krasnodar asked Putin if he would like to leave politics and enjoy life.

Putin also had to express his thoughts about the future presidential election in Russia in 2012. The PM said that he would think about it since there is a lot of time before the date.

“Each and everyone of us must fulfill their duties and work effectively. The decisions about the 2012 pre-election campaign will be made depending on the development of the state of economic and social affairs in the country, but today it’s only 2009,” Putin said.

People also asked Putin about the relations between the prime minister and the president.

“We’ve known each other for many years and we worked together a lot. We graduated from the same university . The principles, which our professors gave us allow us to work effectively today,” Putin said.