At least 39 passengers were killed and about 96 were injured when the Nevsky Express train #166 derailed at 18:34 GMT Moscow time at Bologoye, between Moscow and St. Petersburg, an emergencies ministry source said Saturday. The FSB has confirmed that the derailment was caused by a terrorist bomb. 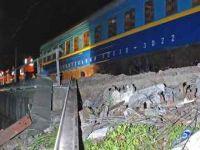 Just prior to the accident, the train driver had applied the brakes. The last four cars out of thirteen left the rails. Witnesses speak of a loud explosion just before the train derailed and claim that a crater with a diameter of one meter appeared in the track.

Aleksandr Bortnikov, Director of the FSB, declared to President Dmitry Medvedev that a bomb with the equivalent of seven kilos of TNT was detonated and caused the incident.

A mobile field hospital was being flown to the accident site, near Bologoye, 200 miles from Moscow, to render assistance to injured passengers. Ambulances, Federal Security Service officers, law enforcement, emergency services and railroad specialists are already at the site.

Thirty injured passengers have been sent to hospitals in Bologoye, Alyoshinka and Borovichi. Another 20 injured were sent to Uglovka. Twenty-three people died instantly and 2 others in hospital. The train was carrying 682 people – 653 passengers and 29 crew – coach attendants and engine drivers.

Russian Railways said trains will move along a bypass route to keep railroad travel between the two largest Russian cities running. Several dozen trains currently on their way to St. Petersburg from Moscow will be delayed by at least 8 hours. It takes Nevsky Express trains, that can travel at 200 kilometers per hour (124 mph), around four hours to travel the approximately 650 kilometers from Moscow to St. Petersburg.