What is happening on board the Alrosa submarine of Russia’s Black Sea Fleet? The information about it is still contradictory. The Alrosa is the only operating sub of the Black Sea Fleet of the Russian Federation. 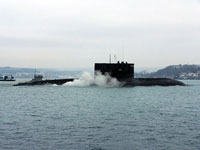 Media outlets continue to publish different pieces of information about the events happening on bard the submarine, whereas officials refuse to release any statements on the matter.

Ukraine ’s UNIAN news agency reported that the crew of the submarine transmitted the SOS signal at about 8:00 a.m. of November 21 when the cruiser was about 150 kilometers far from the coast of the city of Sukhumi.

The news about a malfunction on board the diesel-powered submarine appeared at night of November 21. The reports came from Ukraine. Spokespeople for Russia’s Defense Ministry and the General Headquarters of the Russian Navy neither confirmed nor rejected the information. As a result, the report about the technical breakdown on board the sub was dubbed “informational sabotage.”

It was later said that the Ukrainian media were distributing false information to undermine Russia’s reputation and support anti-Russian sentiments in Ukraine. The reports followed Viktor Yushchenko’s public address to his Russian counterpart Dmitry Medvedev, in which he accused Russia of economic blackmail against Ukraine and said that Russia was seeking unfair gas contracts with his country.

Another version said that the information about Alrosa arrived to Ukraine from Georgian journalists, who in their turn were also interested in undermining Russia’s international reputation.

Russia’s RIA Novosti news agency later released a news story quoting an anonymous official for the command of the Russian Black Sea Fleet. The official confirmed the malfunction that occurred in Alrosa’s engine. The unnamed official also said that there was no danger for the crew of the submarine, but the cruiser was forced to turn back to its base.

The Komsomolskaya Pravda newspaper wrote that the command of the Black Sea Fleet refused to comment the situation. Moreover, it was later said that the submarine had not transmitted any signals. However, it was reported on Saturday night that the submarine was indeed coming back to the base due to force majeure. News agencies reported with reference to unnamed sources and anonymous officials that the Alrosa was on a scheduled trip, but had to stop its operations at sea because of technical malfunctions.

Ukraine ’s UNIAN – the agency that launched the controversy – added more fuel to the fire the next day. The agency said that the submarine sent out an SOS on November 21, when the cruiser was 150 kilometers far from the coast of Sukhumi. The crew reportedly asked for help, but did not specify what was happening on the sub. It was only clear that the crew could not handle the problem alone.

The information from Russian news agencies was completely different. There were no official comments made, but an official with the General Headquarters of the Russian Navy told Interfax that Alrosa had not sent the SOS signal.

The Alrosa submarine is a diesel-electric powered 877B Project submarine. The sub is 76.2 meters long and 9.9 meters wide. The sub is armed with 18 torpedoes and Igla anti-aircraft systems.