Russia is equipping its spaceport at Kourou, the Space Center of French Guiana. This week it sent there two Soyuz rockets. They will be launched into space in 2010 along with the Russian boosters Vega. 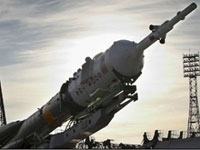 At the moment, a new launch pad is being built in the Guiana Space Center for launching Russian spacecraft.

Why is Russia so interested in developing its space program in Guiana with its horrible climate and sad fame of a former French colony for incorrigible offenders? Pravda.ru interviewed Sergey Fyodorov, a senior research fellow of the Institute of Europe of the Russian Academy of Science, to discuss this issue.

“First of all, it is beneficial for Russia to enter the international space market. We have been collaborating with France in the area of aviation and space industry for a long time. The French are interested in our technologies, that’s why they opened the door that was closed for us before.

There are no rocket carriers in the world that would be comparable with the Russian ones. Ariane used by Europeans is good, but it’s designed for heavy lifting. There are no light rockets in Europe, whereas Russia has the “light” Vega and “medium” Soyuz rockets.

Besides, French specialists believe that Russian rockets are more convenient, simple, and reliable than similar European rockets. Another important factor is that the equator is located 310 miles away from Guiana, which is extremely important for launching space devices.

It is not a coincidence that the French realized the significance of their largest international department long ago and began the construction of their spaceport in 1965. A rocket launched next to the equator receives additional inertia, as if Earth is pushing it into the space. This means that a bigger payload can be carried into orbit with relatively less fuel consumption than if it had been launched from the Baikonur Cosmodrome.”

It seems that Kourou may become the main spaceport on the planet since it has other advantages as well. The region is risk-free in terms of natural disasters, and there is no threat of military actions. More than a half of all commercial sputniks were launched from here. The new spaceport will be beneficial for everyone since Russia would be able to send bigger and cheaper loads to orbit than before.

Russian companies involved with the space industry will be kept busy for many years, while Europeans will be provided with reliable middle-class boosters. It is not ruled out that majority of the Russian space devices will be launched from Kourou.

Anatoly Perminov, head of the Russia's Federal Space Agency (Roscosmos) thinks that the construction of the rocket and space complex Soyuz-2 in Guiana space center is a new step in the development of Russia’s international relationship with the European Space Agency (ESA).

The head of the European Space Agency construction works conducted at the launch pad said that this one-of-a-kind project would result in the mixture of the best Russian and European technologies. He added that Europe is interested in the Russian system due to its simplicity, efficiency and reliability.

Traditionally, boosters are shipped to Guiana by sea. Then they are delivered to the spaceport, assembled, and prepared for launch. Specialists from Roscosmos and the ESA will manage the launch of Russian rockets together.

In November 2003, Russia and France signed a contract to start construction of the Soyuz spaceport 6 miles away from the old launch pad. All preliminary works were conducted by the ESA.

The French Space Agency (CNES) is a part of the ESA that owns most of Kourou’s infrastructure. CNES’s workers cleared the jungle, dug ditches, erected buildings, and installed utilities. In 2007, the construction of launch pads for Soyuz was commenced.

In 2008, Russian specialists began installation of the launching site and equipment for rockets launch. It is possible that not only sputniks, but also piloted space devices will be launched from the spaceport in French Guiana.

According to a representative of the ESA in French Guiana, the project now involves only two participants, Russia and Europe. India, China, and Japan are likely to join the project in the future.