Putin Ranked One of World’s Three Most Influential People

Russian Prime Minister Vladimir Putin appears in the top three of world’s most influential men according for Forbes magazine. The magazine published the list of 67 most influential politicians, businessmen and other influential individuals. 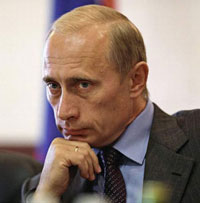 Putin Ranked One of World’s Three Most Influential People

The most influential person in the world is – what a shocker – US President Barack Obama. The magazine gave the second place to China’s Hu Jintao. Russia’s Vladimir Putin comes third.

Russian President Dmitry Medvedev is ranked 43rd on the list, being behind practically all influential leaders of European states. Italy’s Silvio Berlusconi is ranked 12th, German Chancellor Angela Merkel – 15th, British Prime Minister Gordon Brown – 29th. The only European leader that is placed below Medvedev on the list is French President Nicolas Sarkozy, who comes 56th.

The last, 67th place on the list is taken by Venezuelan President Hugo Chavez.