US Embassy in Russia Sends Special Agents to Illegal Rallies in Moscow?

Every act of the “dissenters” is a revelation. For instance, on October 31st, during an unauthorized rally organized by “The Other Russia” on Triumfalnaya Square in Moscow, police arrested Robert Bond, Second Secretary, Vice-Consul of the Embassy of the United States of America. 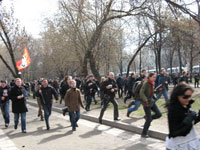 US Embassy in Russia Sends Special Agents to Illegal Rallies in Moscow?

Bond was released after his documents were checked, but some questions remain unanswered. What was the diplomat doing at the illegal rally? It is a fair question considering the history of the creation of “The Other Russia,” when representatives of various Western diplomatic missions came to the founding convention to give the Party their “blessing.”

When the story of Bond’s arrest ended up in the media, the US Embassy officially stated that “political officer Robert Bond was not arrested by the police. He was an observer, not a participant, at the demonstration.”

"The Embassy routinely sends Embassy officers to observe demonstrations, meetings and other political events. It is a usual practice,” emphasized the Embassy representative.

Pravda.ru interviewed Borislav Milosevic, a former Ambassador of the United Republic of Yugoslavia to Russia, to find out what he thinks about this “usual practice.” “Usual practice is to notify respective authorities if you are willing to observe something. In this case, the Embassy should have informed the Ministry of Internal Affairs that it would like to send an observer to the rally. If the Ministry of Internal Affairs issued permission, than the observer’s presence at the rally would be legitimate. “

He added that observing unauthorized rallies the way the American Embassy did could be just a pretext. “You know that now there are very many indirect [contacts with the opposition movements] through various non-governmental organizations. You can support and provide help to many movements. The Embassy would not interfere directly. Such interference would have been careless and would have violated the rules of the country where the Embassy is accredited,” Milosevic said.

“I do not think that observing an unauthorized opposition rally is a legitimate act of the employees of a foreign Embassy,” Milosevic suggested.

Speaking of “The Other Russia” founding convention and foreign diplomats who were present there in 2006, Milosevic said the following: “This is not a well-intentioned and kind behavior of foreign diplomats. I know it well from my own country’s experience, when ambassadors from many countries – England, Germany, and America – acted like governors, you see? They gave their evaluations, solved certain issues, etc. These are not legitimate actions. It is interference [with internal policy] no less! If you support a founding convention of an opposition organization whose goal is to overthrow the power of the existing government, then what is it all about?”

Answering the question about the support of “non - systemic ” opposition from abroad, Borislav Milosevic noted that it “cannot be ruled out.” “I am personally convinced that the support and help, including financial aid, for the opposition leaders and their activities, is out there. However, I cannot prove it and would fail to provide evidence in court. But I would not deny it either .”

Alexander Kolpakidi, a political analyst, the author of many publications about radical political movements and a historian for the special services agencies, is convinced that the presence of a foreign diplomat at the “ d issenters’” rally is the continuation of US policy that has not changed since the Cold War.

“This is a good example that the USA, despite all speculation about the “reset,” continues the Cold War using its regular methods. A Russian Embassy in the US would never think of sending a diplomat to observe an anti-war or anti-Iraq demonstration in Washington or New York,” he said.

“However, the US does it all the time and everywhere, in all countries. If there is an attempt of an overthrow against a government that is not beneficial for the US, American diplomats are always involved. It is their routine practice, and everyone is used to it,” said the analyst.