Russia’s Constitutional Court will gather for a meeting November 3 to consider the issue of death penalty. Russia introduced a moratorium on death penalty ten years ago, until the jury trial system was established in the country nationwide. The Chechen Republic was the only entity of the Russian Federation where there was no jury. The jury will appear in Chechnya on January 1, 2010. 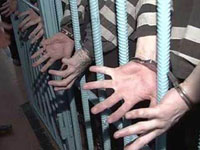 Russia. The Vologda Region. Ognenny Island. A colony for death convicts. Most dangerous criminals – rapists, serial killers and terrorists - serve their terms there. Nurpashi Kulayev, the only terrorist, who remained alive as a result of the school siege in Beslan, and was subsequently sentenced to capital punishment, lives in the colony too.

As long as the death penalty moratorium loses its legal force next year, Russia’s Supreme Court wonders whether it could be possible to execute death sentences beginning with 2010.

Vladimir Ovchinsky, a senior official with the Constitution Court stated in one of his recent interviews: “Death penalty can be applied in Russia nationwide since the establishment of jury trial in Chechnya.”

Russia may change its legislation, of course, or the president may put forward another moratorium on capital punishment to exclude death penalty in the country.

“The question of death penalty in Russia, whether we should practice this type of punishment or not, is not about Russia’s execution of its international obligations. It is a question of our human morality and civilized development,” Konstantin Kosachev, the chairman of the State Duma Committee for International Affairs (United Russia Party) said.

Death penalty was abolished in many countries of the world. However, there are nations that practice death penalty on a regular basis. China, for instance, executed over 1,500 people last year. The Chinese legislation is particularly strict at this point: they can execute even for corruption. In Russia, the issue is highly controversial. What kind of punishment shall be applied to those who, for instance, murder children?

“We mostly talk about human monsters, but we must realize another possibility – a mistake. This is not just a purely emotional thing, to put it mildly,” Vladimir Pligin, an official with United Russia Party said.