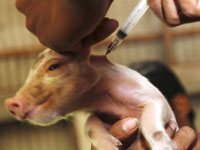 About 500 cases of swine flu in Russia occurred when people returned to Russia from their trips abroad, Interfax reports.

A woman died of swine flu in Moscow yesterday, October 27. Three others died in Russia’s Siberia; one of the victims was pregnant.

However, a 53-year-old female Muscovite caught the virus in Moscow. She died of acute cardiovascular and respiratory inefficiency. The disease was developing against the background of chronic associated diseases – ischemic heart disease, hypertension and hyperglycemia.

Medics said that all the four patients died as a result of self-treatment: all of them did not ask for medical help and preferred to stay at home taking anti-flu pills. When the women were hospitalized, it was too late to save them.

The swine flu epidemics continues to conquer more and more of Russia’s regions. Three swine flu incidents were reported in Kuzbass on Wednesday.

Swine flu diagnosis was confirmed with 349 residents of the city of Krasnoyarsk. Seven students were diagnosed with swine flu in Voronezh.