Russia Ready to Invest Billions in Gazprom's Most Ambitious Projects

Gazprom’s most ambitious political projects - Nord Stream (along the bottom of the Baltic Sea) and South Stream (across the Black Sea) – are worth billions of dollars. The first one of the projects is to be launched in September 2011, whereas the second one does not even have the final construction schedule: the works on the projects started in 2007. However, the second project has all chances to be realized first. 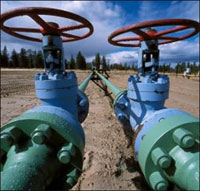 Russia Ready to Invest Billions in Gazprom's Most Ambitious Projects

Russian PM Putin had a meeting with his Turkish and Italian counterparts - Mr. Erdogan and Mr. Berlusconi - yesterday to discuss the projects.

“We can do it indeed. We already have the experience of building the pipeline system in the Black Sea – this is the Blue Stream project to Turkey,” Putin said.

The 25 billion-euro ($36.5 billion) South Stream project is designed to annually pump 31 billion cubic meters of Central Asian and Russian gas to the Balkans and on to other European countries, bypassing Ukraine, which has frequent disputes with Russia over gas supplies and transits. The pipeline's capacity is expected to be eventually increased to 63 billion cubic meters, RIA Novosti reports.

The South Stream project was originally scheduled to go online in 2013 whereas Nord Stream is expected to be fully completed in 2012.

A senior official with Gazprom said that the prime ministers were simply joking. “It’s obvious that they were not serious,” an anonymous official told the Vedomosti newspaper.

The length of the sea leg of the South Stream project is about 900 kilometers. The construction plan has not been coordinated entirely, but the approximate schedule is as follows: exploring the bottom of the Black Sea, coordinating the project between Russia, Bulgaria and Turkey, picking contractors and pipe suppliers and, finally, the construction of the huge gas pipeline system via Bulgaria, Serbia, Hungary, Greece and probably Slovenia, Austria and Italy. The construction of the project can be started at the end of 2010 and completed around 2015.

Now it seems that the South Stream project will be given much more priority than its “competitor” the Nord Stream.

To meet the deadline for Nord Stream, one will have to coordinate all issues between Sweden, Finland, Germany and Russia by April 2010 and build the pipeline system along the bottom of the Baltic Sea in 18 months. The Baltic pipeline may take one year longer: Sweden has a number of claims at this point.

Gazprom has not exposed the financial scheme for the South Stream project, although it will most likely be similar to that of Nord Stream: 30% - own funds and 70% - borrowed funds. The entire project is evaluated at 25 billion euros. Gazprom will have to invest up to 3.75 billion euros in the project during 18 months.