Russian President Dmitry Medvedev gave an extensive interview to CNN prior to his visit to the United States. He was interviewed by Swiss journalists several days ago since he was going to stay in Bern for two days before flying to the USA. 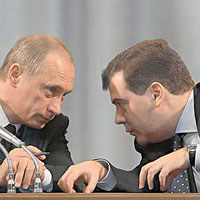 Speaking about the most important events of international politics, which took place last week – Obama’s decision to shelve missile defense plans in Europe – Medvedev said that he was very glad to know that America had finally realized that missile defense was not a matter for one or several countries only, but should be a global effort taken by many states.

As for the development of relations with NATO, Medvedev offered not to force NATO membership on those countries that were not prepared for it.

Instead, he said, one should deal with European security. “Let us promote joint institutes. This position, as it seems to me, finds support with a number of European states that offer not to accelerate the incorporation into NATO for those countries which are not prepared for it,” Medvedev said.

Answering a question about the Kremlin’s attitude to Georgia’s and Ukraine’s NATO membership, the Russian president said that such decisions must be based on sovereign decisions of adequate countries.

“One should keep it in mind that NATO is a military bloc after all, and that its missiles are aimed against Russia. The fact that the number of NATO members continues to grow does not give us any positive emotions. We do not like it and we are being honest about it,” the president said.

As for Russia’s relations with Teheran, Medvedev promised that Russia would deliver only defensive weapons to Iran, strictly in compliance with international laws.

“Russia does have a military constituent in its relations with Iran. We believe that these activities must strictly correspond to international obligations on the part of both Russia and Iran,” Itar-Tass quoted Medvedev as saying.

“The shipment of various types of arms, especially defensive arms, which were designed for defense, may not aggravate tension, but, quite on the contrary, must ease it. Russia’s goal is not about strengthening Iran and weakening Israel or vice versa. Russia’s goal is to have a normal and quiet situation in the Middle East,” Medvedev said.

It is worthy of note that Russia plans to host a conference devoted to the regulation of the Mideastern crisis. The USA also intends to continue working in this direction. Barack Obama will have a meeting with the head of the Palestinian Authority Mahmoud Abbas and Israeli Prime Minister Benjamin Netanyahu. It will be the first meeting of the two Mideastern leaders after Netanyahu’s rise to power.

“The Israeli premier did it secretly, it was his own decision. I do not know exactly why he did so, but we treated it normally as long as our partners decided so. I had a meeting with him ,” Medvedev said .

He also said that Moscow and Washington had good chances to complete the talks about the reduction of strategic offensive arms until the end of the year.

“It would be very good both for us and for the international community,” Medvedev said.

This way or other, the president added, “Russia’s relations with the new administration have been quite positive.”

As for the home political situation in the country, Medvedev said that he was certain about Russia’s capability to handle corruption. He also expects a change in the national mindset of the Russian people.

“It’s easy to say that corruption has become a part of the national system, which helps govern the nation. This is not true . If it were true , we would not have problems . Corruption is not an effective way of the economic management, although it exists in any nation. It can be of large scale in some countries, like, unfortunately, in Russia, and of smaller scale in other countries,” Medvedev said.

The Russian president said that there was no regress of democracy in Russia.

Speaking about the freedom of press, Medvedev said that this subject would always have various dimensions.

“Some people believe that the Russian media outlets are not numerous, but it is not true. There are a lot of media outlets in Russia, including electronic and printed media, not to mention the Internet, but some say that they have been suppressed. I do not think that it is an honest position, since journalists cover any issue that they want in their reports without any problems,” he said.

Medvedev was asked about his relations with Vladimir Putin. An interviewer asked the president whether he was Putin’s chief. Medvedev responded that he was not going to sack Putin’s government.

“If a president has to reshuffle the government to prove his power, as some of my colleagues did during the 1990s, when governments would be changed every six months, if this is a sign of power and democracy, then it is not my choice,” he said.