Hugo Chavez’s visit to Moscow was not going to bring any sensations. The visit was all about the development of the economic and defense cooperation between Russia and Venezuela. The breaking news appeared after the official talks, during a press conference of Medvedev and Chavez. 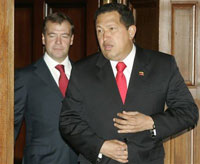 "Venezuela from today is joining in the recognition of the independence of South Ossetia and Abkhazia. We soon will begin actions to establish diplomatic relations with these countries," Chavez said during a visit to Russian President Dmitry Medvedev's residence outside Moscow.

"Thank you, Hugo. Russia has always supported a country's sovereign right to recognize or not recognize a state's independence. But of course we are not indifferent to the fate of these two states. We're very grateful,” Russian President Medvedev responded.

Only Russia and Nicaragua recognized the independence of Abkhazia and South Ossetia after the war in the Caucasus in the summer of 2008.

“We are very pleased that the Bolivarian Republic of Venezuela recognized our independence. We would like to thank Hugo Chavez for his care and attention to the two nations. We would also like to express our gratitude to the people of Venezuela for electing such a president,” assistant to the First Vice Prime Minister of South Ossetia, Inal Pliyev said in an interview with Pravda.Ru.

“Sooner or later, many other countries will follow Russia, Nicaragua and Venezuela. South Ossetia maintains contacts with representatives of many countries that have not recognized us. The process has not been stopped, it develops steadily, and we are not rushing,” Pliyev added.

“I believe that Georgia must terminate diplomatic ties with Venezuela now. We did not have anything from these relations after all. Chavez depends on Russia because he wants Latin America to give the finger to the USA behind Russia’s back,” the official said.

Venezuela’s allies – Cuba, Bolivia, Ecuador and others – may follow Chavez’s example already in the near future.