Venezuela's Chavez Arrives in Moscow for Tanks and Missiles

Venezuelan President Hugo Chavez arrived in Moscow for an official visit. On September 10 Chavez is to conduct official meetings with President Medvedev and Prime Minister Putin. Russia and Venezuela are reportedly going to sign about ten documents in the field of energy and defense industries, as well as a number of financial documents. 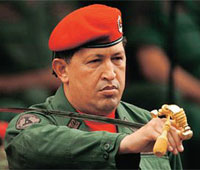 Venezuela's Chavez Arrives in Moscow for Tanks and Missiles

Venezuela is very interested in purchasing Russian arms on credit: the nation’s purchasing capacity lowered considerably because of declining prices on oil, The Kommersant newspaper wrote. Moscow is prepared to support Caracas, but hopes to strengthen the oil alliance in Venezuela in return.

Chavez arrived in Moscow to coordinate a new package o documents for defense cooperation with Russia, The Vedomosti newspaper wrote with reference to a source at Russia’s defense export corporation, Rosoboronexport. The new documents stipulate a shipment of up to 20 Tor-M2E missile complexes to Venezuela, as well as up to 100 modernized T-72M1M and new T-90 tanks, Il-76 cargo planes, Il-78 refueling aircraft and other hardware in the total sum of up to $2 billion.

The contracts, the newspaper wrote, are to be signed later this year.

Sergey Prikhodko, an assistant to the Russian president, previously said that a package of intergovernmental agreements for cooperation in the defense industry was expected to be signed September 10 as a result of the talks between the two presidents.

The USA has been trying to strengthen its positions in Latin America too. The nation signed an agreement to use Columbian army bases to struggle against drug trafficking.

Medvedev and Chavez will also sign agreements on cooperation in the oil and gas industry. Russia seeks access to Venezuela’s Orinoco fields with estimated 53 billion barrels of crude reserves.

In addition, Moscow would like Caracas to recognize the independence of Abkhazia and south Ossetia, the Rossiiskaya Gazeta wrote.