It is hard to find two sources that say the same thing about the curious case of the Russian cargo vessel Arctic Sea, which disappeared mysteriously among stories of piracy in the heart of the European Union, sightings confirmed and then denied. What are the facts and what are the myths? 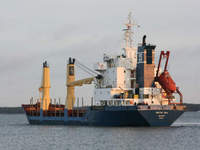 On July 22, the Arctic Sea, 98 metres long, 4,000 tonnes, flying the Maltese flag, left Jakobstad, Finland, on route to Bejaia in Algeria, carrying a cargo of timber worth 1.8 million dollars. It should have arrived on August 4.

August 12. The British coastguard states that the Arctic Sea was sighted off the Portuguese coast. President Dmitry Medvedev orders a search party to be sent from the Russian vessels in the Black Sea Fleet currently in the Atlantic Ocean.

The search operation proceeds in the region of Cape Verde but not in the territorial waters of this West African country. The frigate Ladny leads the Russian search party. The police forces of Russia, Finland, Sweden and Malta are investigating the case.

The ship could not have sunk without emitting a signal which would have been picked up by Russian or US satellites.

Attack in the Baltic Sea

July 24. Dawn. According to a crew member, reported by “Baltic media outlets” the ship was boarded near the Swedish island of Aland by a group of around ten masked men who claimed to be Swedish police officers. After tying up and assaulting the crew, they searched the ship for 12 hours and left in high-speed rubber boats.

The Financial Times states that the ship was hijacked and that a ransom note of 1.5 million USD was delivered. Russian sources do not confirm this version. However, Russia’s envoy to NATO, Dmitry Rogozin, stated that an operation is under way to guarantee the safety of the crew members.

The Finnish national radio outlet YTE states that the Finnish National Bureau of Investigation claims that the owner of the vessel, the Finnish company Solchart Management, received a ransom demand which included a threat against the lives of the crew members if the terms were not met. The Finnish police force has confirmed that the demand was made but its source has not been clarified and the exact quantity of 1.5 million USD was not referred to, only “a high amount”. Mikko Paatero, spokesperson for the Finnish Police Force, speaks of “reports of aggravated blackmail and hijacking” which are currently under investigation.

August 14. The Cape Verde coast guard informed AFP that the ship had been sighted 400 nautical miles from the islands. A spokesperson from the Russian Embassy in Cape Verde claimed that the same authorities had not “officially” informed the Embassy of this and said that the Head of the Armed Forces of Cape Verde did not confirm that the Arctic Sea had been seen in these waters.

However, the Ambassador of the Russian Federation in Cape Verde, Aleksandr Karpushkin, stated that Russian ships are undertaking operations to find the ship in the region but not in Cape Verdean territorial waters.

Several media outlets have spoken of rumours of a strange cargo on board, namely drugs or weapons but these reports remain precisely that: rumours and nothing has been found to substantiate these smears. There is also no evidence to support the story that the ship was involved in a commerical war with competitors.