When Vladimir Putin took the post of the Russian Prime Minister on August 9, 1999, no one could assume that the new minister would gain so much power in the country, and that even the economic crisis would not change his ratings. Putin’s phenomenon is based on two things: the advantageous historical environment and the exceptional intuition. Many scientists study the phenomenon of Putin at the moment, trying to unravel the mystery of his popularity. 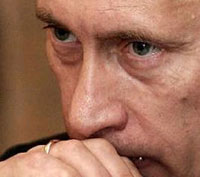 Putin has a talent to look natural in any situation, to respond offhand, make jokes and talk movingly with people, acting better than any actor. Putin constantly demonstrates his excellent physical form, energy and readiness to be closer to the people. The general public can see him either communicating with young people personally or catching fish with no shirt on.

Experts say that many evolutionary changes among the political elite took place by Putin’s administration. The top echelons of power were renewed by 25 percent during the first two years of Putin’s rule - and “it was done in an extremely delicate manner,” a senior spokeswoman for Russia’s Institute for Sociology Olga Kryshtanovskaya said. The most noticeable fact was the promotion of law-enforcement and security officials in the Russian administration. By Kryshtanovskaya’s opinion such policy could be explained by the necessity to arrange the domestic affairs of the country. However, the law-enforcement and security officials found it difficult to solve new management problems. They found themselves in the sphere where they were not experts. They had to learn the art of administration just like Putin did, the expert believes.

The prime minister incarnates the new ideology combining the views of the right and of the left, the expert notes. “He is the first neoconservative. He has found his personal style both in politics and in economy.” By his administration the Yeltsin's oligarchy either vanished or rearranged itself, it became more unpretentious and reserved. The public corporations that came into existence by Putin’s administration have become his new elite.

Nikolay Petrov, a scholar in residence at the Carnegie Moscow Center also commented Putin’s phenomenon. By his opinion, the domestic and external affairs of the 1990s played into the hands of Putin. However, the absence of the institutions to constrain and direct his energy became apparent at once.

Putin’s growing popularity affected his policy, experts say. He was afraid to introduce risky reforms and make decisive steps in order not to lose his popularity. Nikolay Petrov divides Putin’s ten-year administration into two periods. The first was the period of decisive reforms. The executive head of the nation was working actively on various directions. During his second presidency Putin took all possible measures to stay in power.

This situation has played a low-down trick with Putin. “He wanted to be a decorative prime minister in the context of the financial well-being of the nation. However, now he plays a serious functional role which he has not been prepared to; therefore it is still an open question what place in history Putin will take,” Nikolay Petrov concluded.