It has become common fodder amongst the Oligarchical press of the West, specifically that of the Anglo-Sphere, to wax thoughtlessly about the corruption of Russia. Like screeching Scottish banshees they wail their dearth of stolen treasures. Of course, one must now wonder which treasures, when speaking of Russia, are these lepers of decent thought alluding to? Peal away the dead skin of their rotting hides and the lies of than President Putin and his clique stealing Russian treasures, falls off like so much diseased flesh. 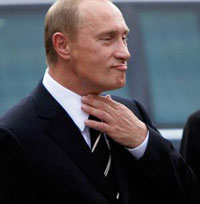 It is interesting to note that the vampires who even now drain their helpless fellow citizens into abject poverty, the Nosferatu who own the liberals and conservatives of Anglo finance, were more than happy to loan massive amounts of funds (much of which was than rerouted back into their coffers after paying Yeltsin and his goons a fair share) to young, post Soviet Russia as well as to the Soviet Union itself, as it lay dieing in the late 1980s. Of course, those loaned funds, which went to benefit first and foremost the Central Asian, Caucus and Baltic republics of the SU , were first, foremost and only placed upon the shoulders of the Russian peoples.

The plan, of course was simple: a debt laden Russia, one unable to survive without direct infusion of funding, would have no freedom of action on its own but would be forced to always look at her creditors for permission before acting even in self defense. Thus the Soviet Union was dissolved as a territory. Thus did NATO expand, ripping away its promises. Thus did the West led by the Anglos butcher and maim and reign the Devil's terror upon helpless Serbian Orthodox Christians, whose one crime was to resist the Islamic onslaught that the Anglos so love to serve. Thus was the first Chechen war lost, as pressure built upon Moscow to always step back and negotiate, a process that had as much success as that forced down the throats of Israel, India, Nigeria and Armenia.

Thus, it is interesting that the Russian stabilization fund, a fund that in two parts firstly is invested in the US to the tune of almost $400 billion in various debt instruments and in Russia as a bad weather fund that still has well over $300 billion in it, did not exist for the entirety of Yeltsin’s rule.

In deed, the man the West loves to label a thief, Vladimir Putin, first and foremost paid off all of Russia's outstanding debts with oil monies that had seemingly not existed under Yeltsin the traitorous puppet. We shall not dive into the question of where that money went, under Yeltsin, anyone with a grade school intellect can figure that out.

Of course the Anglo media must lie, lie, lie, it would not dare tell its public that life without debits possible or desirable and how the world's 7 th largest economy was able to shed it, to protect its industries and markets from Chinese dumping, to live within its means while growing industry at 7% annually, to work towards the good of its people, as well as its rich. Public ignorance and superstition is the saving grace of the Western and specifically Anglo oligarchs and their hand picked media mouth pieces.

Putin, in short order paid off $3.3 billion to the International Monetary Fund (IMF), he paid off $15 billion to the Paris Group, $4.3 billion to the World Bank, $1.4 billion to cover the deficit in the Russian Pensioner Fund and the $46 billion debt of the old and defunct Soviet Union. After that he grew the internal stabilization fund at an incredible rate. The fund, which by August 2006 had $82 billion in it, by January 2008 had $157.4 billion in it and continued to grow through the end of 2008. This fund has allowed Russia to continue without the mass liquidity bubble of the broken Anglos or the depressionary collapse of industry of the Japanese.

This has not only brought the Russian state a freedom of action it had previously not had, but it has allowed it, during this second Great Depression to act freely and avoid the death trashes of a bloated Anglo-Finance Cthulu . It has equally allowed Russian business to go on a buying spree of devalued Western assets, be it Opel, Porsch or Facebook .

Freedom from debt has its advantages.

The article has been reprinted with the kind permission from the author and originally appears on his website, Mat Rodina