The Russian Ministry for Foreign Affaires is outraged by provocative action of the mayor of the town of Constanta, Romania. The mayor, Radu Mazare, wore a Nazi uniform during a fashion show. 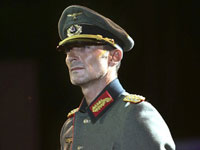 Spokespeople for the Russia’s Foreign Ministry said that “such a blasphemous act that dishonored the memory of millions of Nazi victims should not be left without the most serious international reaction.”

Radu Mazare and his 15-year-old son appeared at a fashion show dressed in the uniform of a Nazi general. The mayor explained that he wanted to dress like a Wehrmacht general because he had always liked this uniform. He emphasized that the uniform had no swastikas on and it was not the uniform of SS officers.

The mayor also told journalists that he decided to wear the uniform as he had been inspired by Valkyrie - the movie starring Tom Cruise.

The Simon Wiesenthal Center Director Efraim Zuroff was indignant about Mazare’s action. Zuroff said that Mazare should correct his mistake and organize a special exhibition in Romania to highlight Nazi crimes against humanity.

The Office of the Prosecutor General has already received an application to investigate the incident. Wearing Nazi uniform is illegal in the eastern European country, that’s why several public organizations insist that Mazare broke the law and instigated a child to follow his example.

Mazare made an apology for that action in his interview with Romanian journalists.