Russia May Soon Have Its Own Obama from Guinea-Bissau

The campaign to elect the municipal government of Russia’s Volgograd region has turned into a scandal. The candidates use all possible methods, including the racial issue, to attract electors’ attention, the Nezavisimaya Gazeta reports. 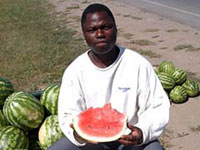 Russia May Soon Have Its Own Obama from Guinea-Bissau

A native of Guinea-Bissau, Joakim Krima, a 37-year-old graduate of the Volgograd Pedagogical University, set out his wish to run for the head of the regional government. The “black Russian” was born in Africa and moved to Russia’s Volgograd region 12 years ago. Krima, who sells watermelons, refers to himself as a Russian citizen. He says that his name is Vasily Ivanovich (in honor of Vasily Chapayev, a legendary commander of the Red Army).

The billboards with Joakim Krima’s image and “The New Head of the Region” slogan have been erected along many regional highways recently. Local reporters have already dubbed him as “the Volgograd Obama.” Local people joke that if he is elected, he will work like a slave for the region.

Volgograd is a city and the administrative center of Volgograd Oblast, Russia. It is 80 kilometres (50 mi) long, north to south, situated on the western bank of the Volga River. The city was the site of the Battle of Stalingrad during World War II.

Volgograd originated with the foundation in 1589 of the fortress of Tsaritsyn at the confluence of the Tsaritsa and Volga Rivers. The fortress, which took its name from the local name Sary Su (Yellow Water/River in the Tatar language), was established to defend the unstable southern border of Tsarist Russia and became the nucleus of a trading settlement. It was captured twice by Cossack rebels, under Stepan Razin in the rebellion of 1670 and Yemelyan Pugachev in 1774. Tsaritsyn became an important river port and commercial centre in the 19th century.

Under Stalin, the city became heavily industrialized and was developed as a centre of heavy industry and trans-shipment by rail and river. During World War II (Great Patriotic War), the city of Stalingrad became the center of the Battle of Stalingrad as well as the pivotal turning point in the war against Germany. The battle lasted from August 21, 1942 to February 2, 1943. 1.7 million to 2 million Axis and Soviet soldiers were either killed, wounded or captured, as well as over 40,000 civilians killed. The city was reduced to rubble during the fierce fighting, but reconstruction began soon after the Germans were expelled from the city.