Poker is not a sports game in Russia anymore. Vitaly Mutko, the Minister for Sports, Tourism and Youth Politics, signed the adequate decree in Moscow yesterday to ban the gambling business in Russia completely. 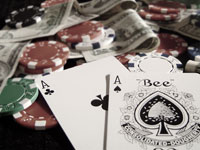 Poker was included on Russia’s sports list in violation of law, the minister said.

“The decision to include poker on the sports register was supposed to be made by a special ministerial commission, not by the administration of the Russian Sports Agency. In addition, the decision was supposed to be registered in the Justice Ministry, which did not happen,” the official said in an interview with the Vedomosti newspaper.

Russia’s Sports Agency, Rossport, recognized poker as a sports game in March of 2007. Seven-card stud poker, Omaha and Texas HoldEm were put on Russia’s sports register three months later. All these games have now been banned in Russia once they are held outside the four gambling areas.

“We hoped that common sense would win. They were given two years to close the casinos, but here we can have police visiting at any moment,” Dmitry Lesnoy, the president of Russia’s Sports Federation complains.

“We are very sorry to lose our image in the eyes of the international poker community that was hoping to see the European Poker Tournament in Moscow this year. It will be a great pity for us if Russian poker stars move abroad to play under the flags of other countries. But we have to accept the inevitable,” the official statement from Russia’s Sports Poker Federation said.

Russian poker clubs will have to close their businesses now. The clubs were brining the profit of up to 70 million rubles a month.

Many Russian poker clubs were going to hold sports tournaments from July 1, but the government ruined the plans. Prime Minister Vladimir Putin stated last week that he could see the attempts to disguise gambling under various activities, such as poker clubs.

Poker is not the first game, which the Russian government begins to struggle with this summer. Bookmaking offices will most likely find themselves in a similar situation, if the Russian parliament approves the draft law about new rules for licensing bookmaking offices. For the time being, bookmaking is the only form of gambling which has not been banned in Russia.

The European Poker Tournament was supposed to begin in Moscow in August of this year. Leading poker players from Russia, Europe, Asia and America were expected to come to Moscow for the event. It is not known yet, whether the tournament eventually takes place in Russia’s capital or not.