Ministry of Foreign Affairs of the Russian Federation angrily reacted to the OSCE Parliamentary Assembly resolution, in which Stalinism and Nazism were referred to as “the two major totalitarian regimes of the 20th century.” 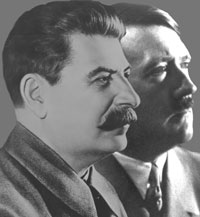 As early as June, 3 the members of the European Parliament decided that Hitler’s Germany and Stalin’s USSR were equal and proposed to mark August 23 as the Day of Remembrance for victims of Stalinism and Nazism. Germany and the Soviet Union signed a pact carving up Eastern Europe between them on August 23, 1939.

The OSCE omitted May 9th, 1945, when Nazism was defeated in the world due to the USSR’s enormous efforts. The organization paid no attention to fascists in Italy, military dictatorships in Hungary and Romania during the 1930s and the 1940s, totalitarian regimes in Spain and Portugal and “Black Colonels” junta in Greece. There were many similar regimes in Europe in the previous century.

Moscow disapproved such a selective view of history. Russia’s Foreign Ministry urged Russian deputies to publicly boycott the OSCE Parliamentary Assembly resolution and deal with their colleagues from other countries personally. Spokespeople for the ministry said that the members of the European Parliament should pass a new resolution the next year to acknowledge the decisive contribution of the USSR to the victory over Nazism.

Experts think that the Russian Foreign Ministry does the right thing, though Russia on the whole is inactive. Russia is forced to engage in the war on history. Europe tries to present Russia as the enemy, on the basis of falsification, that’s why Russian official persons should act decisively.