Russian President Dmitry Medvedev, who visited the republic of South Ossetia for the first time, shared his impressions of the country, which Russia recognized as an independent state after the armed conflict with Georgia last summer. 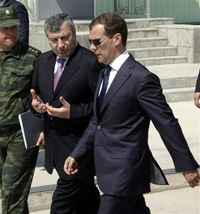 “It was our first visit to the new state, which appeared as an independent country nearly a year ago. It happened after an act of rude aggression on the part of the Georgian regime,” Itar-Tass news agency quoted Medvedev as saying. “The Georgian regime is entirely responsible for what happened in August of 2008,” Medvedev added.

“The Georgian nation will someday bring down its sentence on Saakashvili’s regime. Russia’s objective is to help the young nation rise to its feet, overcome difficulties and survive under very complicated conditions in the Caucasus,” the president told reporters at a news conference in Russia’s Sochi.

Speaking about the living conditions in the city of Tskhinvali, the capital of South Ossetia, Medvedev said that the life of the people there was very hard. However, he continued, all of them were grateful for Russia’s decisions, the nation made during the war. “If we hadn’t made those decisions, many of those people wouldn’t have been alive today. They were thanking Russia with tears in their eyes,” the Russian leader said.

Medvedev said that he visited Russia’s army base in Tskhinvali. “The base is a signal for those who may have idiotic plans in their heads,” he said.

Dmitry Medeved also told reporters that a Russian strategic nuclear-powered submarine performed a successful launch of a ballistic missile on July 14. The president did not specify the class of the missile, though.

Russia has been testing its Bulava intercontinental ballistic missile for several years already. Several of such launches did not prove to be successful. A source from Russia’s Defense Ministry told Interfax news agency that it was not the Bulava missile, which Medvedev spoke of.

To all appearance, it goes about the launch of a sea-based strategic missile of the Russian Navy. The missile was launched successfully on Monday night. The test launches of the Bulava rocket will take place later, in accordance with a special program.

RIA Novosti news agency reported that Dmitry Medvedev was talking about the launch of the RSM-54 Sineva missile.