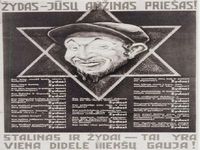 It was Vilija Aleknaite-Abramikiene, of Lithuania, who wrote the proposal Reunification of Divided Europe, asking for a condemnation of Nazism and Stalinism, as though they were one and the same thing. And it was Slovenia that supported the motion, accepted overwhelmingly by most of the Assembly. But this will not remain here.

We aim to follow the history of Lithuania during the Nazi period and we will see if Slovenia does not have skeletons in the closet. In subsequent editions of this paper, we are going to examine case histories, and the massacres perpetrated, by the countries that signed this document and we will come to a conclusion: two people can dance the Tango. If you want to offend Russia, which as a member of the Soviet Union lost more than 26 million sons and daughters defeating Nazism, then we will also remember not just some incidents that marked history, selectively, but all of them and celebrate all the victims of all Governments throughout history.

The session of OSCE approved the Lithuanian-Slovenian resolution on Friday, the third of July. Of the 320 members of the House, eight voted against and there were 4 abstentions. There are plans to commemorate the victims of Nazism and Stalinism on August 23, the day the Molotov-Ribbentrop Treaty was signed seventy years ago, based on this resolution, which refers to "two totalitarian regimes, the Nazi and Stalinist which have implemented genocide, human rights violations, war crimes and crimes against humanity.”

We will present a few truths on August 23. Until then, we will publish the facts about the history of the countries that supported this resolution and at the end of the day, we are going to draw our conclusions.

We can start with, for example, the promoters of the resolution, Lithuania and Slovenia. In Lithuania, while Russians and Soviets were losing more than 26 million souls to destroy Fascism-Nazism, the authorities installed the Kovno (Kaunas), Kauen, Slobodka, HKP (Vilna) and Prawienischken collaborationist extermination camps, where they massacred between 135,000 and 220,000 people. They began before the Nazi occupation on the 24th of June 1941, with Lithuanian fascists attacking the Jews in Kovno. During the occupation, the Lithuanian Einsatzgruppen Auxiliary and the Lithuanian Security Police perpetrated acts of slaughter. Genocide, human rights violations, war crimes and crimes against humanity. Or were they “just having fun” like Lynndie England in Abu Ghraib.

Moving to Slovenia, Slovensko Domobranstvo, SD, was a collaborationist force, formed by General Rosener of the Nazi SS and which perpetrated worse atrocities that even the cruelest of the SS. The Domobranci (members of this organization) helped the Nazis against their own countrymen, torturing the Partizans who fought off Hitler. Could it be that the Slovene who supported the OSCE resolution is a Domobranec sympathiser? Genocide, human rights violations, war crimes and crimes against humanity.

In the coming editions, we are going to pass a fine comb on the history of the OSCE member countries that voted on behalf of the Resolution, comparing these with the country that lost 26 million lives to fight Fascism with the Nazi aggressor so that they could live today in peace. Some gratitude!

Photo: Anti-Semitic Poster given out by the authorities of Lithuania during the Great Patriotic War.