Russians choose most affordable and natural entertainment during crisis time

The number of sex shops has been growing steadily in Moscow and St. Petersburg. The annual volume of this market nears $30 million in Moscow at the time when the world economic is declining, BBC Russian reports. 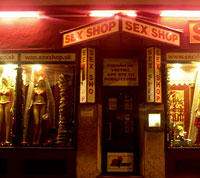 Russians choose most affordable and natural entertainment during crisis time

Over 200 sex shops are currently open in Moscow, whereas there are only 40 of such shops in St. Pete. The number of customers at Moscow sex shops has been growing recently too, the director of Moscow-based Mon Amour retail network, Rostislav Poleshko said. People need to take a rest from their family and work problems, which became especially serious during the time of the crisis.

The need in sex, like the need in food, does not depend on the economic situation. “We have an optimistic theory – home sex will be the only affordable entertainment for many during the crisis,” Marat Tagirov, a co-owner of Pornomania boutiques said.

Sex shops on the outskirts of Moscow are positioned according to their business profile – sex shops. The situation is different in the central area of the city, where the shops selling intimate goods are disguised as beauty shops. Beauty shops mostly sell expensive goods: designer lingerie, intimate cosmetics, intimate decorations and sex toys.

Moscow’s “beauty shops” offer the products imported from Europe and the United States. Those customers, who attend the stores on the outskirts of Moscow, have to enjoy “made in China ” labels. Russian products make only ten percent of the entire range. Many stores sell low-quality goods, which do not undergo the required certification.