Barack Obama’s departure to Russia became a huge event in the United States. Obama, his wife Michelle and their daughters Sacha and Malia arrived at an air base near Washington on Sunday. Afterwards, the family boarded the presidential Boeing-747-200B. 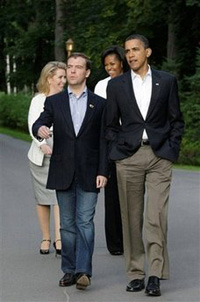 Obama’s airplane is a three-decked jetliner with a conference room, a study, a shower, several bedrooms and a gym. The plane can be used as a mobile command post in case of a nuclear war. The liner can fly a distance of up to 15,000 kilometers without refueling.

Click here to see the photos of Obama's adventures in Moscow

Obama’s plane landed at Moscow’s Vnukovo-2 Airport. There was no guard of honor to greet Obama in Moscow because the US president arrived for a work, not for a state visit. Mr. Obama and his family disembarked the plane and got into an armored limousine, which took them to the Kremlin.

It took the procession of the US president only 15 minutes to get from the airport to the Kremlin. The cars were traveling at the speed of 130 km/h. The traffic on Moscow’s Leninsky Prospekt was entirely blocked for that time.

A source from Russian law-enforcement agencies said that the speed was chosen for safety reasons. If a car travels at the speed of 110 km/h, it is practically impossible for a sniper to take it as a target, the source told Life.ru website.

Barack and Michelle Obama named their younger daughter as Natasha (also known as Sasha) in honor of Natalia Goncharova, the wife of the Great Russian poet Alexander Pushkin. Obama said in one of his interviews prior to his visit to Moscow that he liked the work of Alexander Pushkin very much.

Russia and the USA signed a new agreement on cooperation as a result of the meeting between the presidents of the two countries in Moscow. The agreement will give an opportunity to retrieve the military cooperation, which was ceased in August of 2008, and will create conditions to take the cooperation to a new level, Interfax reports.

The work plan of defense cooperation between the two countries for 2009 stipulates about 20 joint military drills, which will be held before the end of the current year.

Nikolai Makarov, the chief of Russia’s General Staff, told reporters that the joint drills would be held, albeit not this year.

The military cooperation between Russia and the USA was suspended after the armed conflict between Russia and Georgia in August of 2008. Moscow recognized South Ossetia’s and Abkhazia’s independence as a result of the conflict. Barack Obama stated after his talks with Russia’s President Medvedev that the USA supported Georgia’s territorial integrity but stood up against a new armed conflict in the region.

“I reiterated my firm belief that Georgia's sovereignty and territorial integrity must be respected. If even as we work through our disagreements on Georgia's course, we do agree that no one has interest in renewed military conflict,” Obama said at a joint news conference with Medvedev after their talks.

Barack Obama had to answer a ticklish question, which a US journalist asked him during the news conference. The journalist asked who of Russia ’s two leaders – President Medvedev or PM Vladimir Putin – was holding the real power in the country.

Obama had his first meeting with Vladimir Putin in Moscow on July 7 in the morning. After exchanging pleasantries, Putin told Obama that Russia is hoping for better relations with the U.S., following the disagreements that arose with the previous administration, RIA Novosti reports.

"We link your name with our hopes for the development of Russian-U.S. relations," he said.

Obama told Putin: "I am aware of the extraordinary work you have done as president in previous years and in your current role as prime minister," and said the meeting provides an opportunity to "put U.S.-Russian relations on a much stronger basis."

On Tuesday, Barack Obama is to meet former president of the USSR, Mikhail Gorbachev. The meeting will last for only 15 minutes at Moscow’s Gostinny Dvor, where Obama will deliver a speech at the ceremony to award diplomas to the graduates of the Russian Economic School, Radio Mayak reports with reference to the press service of the Gorbachev Foundation.

Mr. Gorbachev has already met Obama before – in March of 2009 in the White House. The ex-president of the Soviet Union had a lengthy conversation with US Vice President Joseph Biden, when Obama decided to join them in the conference room.

Mikhail Gorbachev did not disclose any details which he was going to discuss during his meeting with the US president, but said that he treated the US leader “very positively.”