The Third Rome, A Heavy Responsibility

An old proverb says: “A Russian has wide shoulders and a strong back.” And frankly we have to, for upon those shoulders and back, was put the weight and responsibility of the Third Rome. 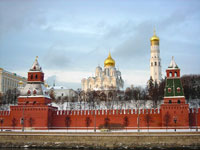 The Third Rome, A Heavy Responsibility

American Fundamentalist nonsense about Russia being the Magog (or Gog, take your choice) of ancient times, a set of beliefs that came to fruition in the 1950s with aid and approval of the CIA and NSA, as it helped radicalize the base against the Soviets, Russia and Moscow in specific do have a very large and important role in the plan of God, though hardly the one that most American fundamentalists care to think about.

But first, before we move into how the Irish saved England or rather the larger replay of how the Russians will save Europe, we must understand what is the Third Rome and how this came about.

Everyone can guess that Rome was obviously the First Rome, but alas great Yurik, it fell into heresy. We knew her well, but off she went, splitting the Christian Church asunder in a bid for total power. Thus, with the first Rome in heresy, Constantinople took up the mantel of Second Rome, which in many aspects she always was, first as the second capital of the Roman Empire and second as the second highest patriarchal throne in a system of equals, where the First Rome's Bishop was first amongst equals. Unfortunately, just like Rome fell to heresy in 1053 AD, so did Constantinople fall to infidels and heretics, the Islamic hordes of the Turks, in 1453 AD, exactly 400 years later.

With this, only one major Orthodox nation remained free of either heretic conquest or that of the Islamic scourge, but even that nation was just now starting to climb out from under the heel of the Mongols and its leading principality, which was rebuilding Kieven Rus, though further to the east, was the Principality of Muscovy and its capital city of Moscow. Muscovy was like the seven thousand Israelites following the prophet Elijah, who refused to bow to Baal, a lone light in the wilderness of sin, corruption, war and murder against the Word of God.

The notion throughout the lone pockets of oppressed Orthodoxy and the growing Russian lands continued to take form and were formally summarized in these words:

"The Church of old Rome fell because of the impiety of the Apollinarian heresy; the Church of the Second Rome, Constantinople, was smitten under the battle-axes of the Agarenes; but this present Church of the Third, New Rome, of Thy sovereign empire: the Holy Catholic and Apostolic Church... shines in the whole universe more resplendent than the sun. And let it be known to Thy Lordship, O pious Tsar, that all the empires of the Orthodox Christian Faith have converged into Thine one empire. Thou art the soul Emperor of all the Christians in the whole universe... For two Romes have fallen and the Third stands and a fourth shall never be, for Thy Christian Empire shall never devolve upon others." They were written by the monk Philoteus to the Grand Duke (Tsar) Vasilli III, in 1510.

Thus, the heavy burden fell upon the Rus, attacked by enemies from every corner, by the Mongols and the Turks, by the Swedes and the Teutonics, by the Poles and Lithuanians, to not only survive Orthodoxy in a world of darkness and sin, but to let God's faith prosper and grow. But most importantly, the true responsibility of the Rus, of the Russian peoples, is to save Europe and the West from itself and from the anti-Christian (or as they now prefer to call themselves: post-Christian) and the Islamic scourge that the West is rotting of, like a gangrened alcoholic, dying a slow withering, rotting death.

To this end, God has given us a great ability to suffer and to bare up under that suffering. He has thrice punished us severely for turning our backs upon Him, as He did to the Israelites of ancient days. First He sent upon us the Mongols, for we did not listen to His Church when it counseled our princes to unify in strength and stand strong in faith and they and our cities fell one by one. Only through great pain and suffering did we again learn love of God first and humility always. To that end, He gave us Dmitry Donski who in 1380 defeated the Mongols on the Donsk River on the fields of Kulikovo, after a long and bloody battle. It took almost another 100 years, to 1452, to fully be rid of the Mongol Yoke and their taxes.

God punished us a second time with the Great Smuta, from 1600 to 1613, for again disobeying His will and for entertaining the notion of putting Catholic Polish princes upon the Russian throne. Thirteen long years of civil war, murder, foreign crusader invasions and anarchy, until two national armies composed of peasants and noblemen rose up and under the leadership of Kuzma Minin (a butcher) and Dmitri Pozharsky ( a minor noble) drove out the Poles, brought order back to Russia and convened a Zemsky Sobor which in turn elected the first Romanov, Michael, to the throne, at the Ipatiev Monastery in Kostroma. On a side note, the last Tsar was murdered at the Ipatiev House in Yekaterinburg.

The last time God punished us was the worst of all, it was 70 years of Marxism and its sponsors were again in the West, driving to destroy Russia and her Orthodox faith. Never had so many suffered and died in Russia or destruction seemed so real. But not only did we survive and break free but in His punishment, the Lord protected us from the rot of the modern West's nihilism and humanism and the enforced (rather than the solicited) atheism in Russia has had the opposite effect to bring Christ and His Church again into the very forefront of Russian life and culture.

But the forces of evil have not changed and continue to assail us upon all of our borders, even as we now begin to assail them upon their borders, which brings us to the ultimate discharge of the duty that the Lord has bestowed upon the Russians.