Russian and US media continue to discuss the forthcoming official visit of US President Barack Obama to Russia on July 6-8. Obama gave an exclusive interview to Itar-Tass news agency and Russia TV Channel. 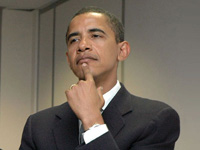 In his first-ever interview for the Russia media, the US president spoke about the relations between the two countries and shared his thoughts about the Russian leaders – President Dmitry Medvedev and Prime Minister Vladimir Putin.

The interview will be broadcast on July 4 on Russia TV Channel.

The US president said that the recent years of the US-Russian relations left much to be desired. Mr. Obama believes that the two countries have new opportunities for cooperation on a wide range of issues. Obama said that he wants the Kremlin to know that America treats Russia with respect and intends to build its relations with the country on the basis of equality.

Obama believes that the United States and Russia carry special responsibility in the world as nuclear powers. Barack Obama described Russia as a great country with extraordinary culture and traditions.

The US president expressed his personal thoughts about the persona of Russian President Dmitry Medvedev. Obama described his Russian counterpart as a thoughtful and progressive person who successfully leads Russia in the 21st century.

Obama is certain that the mutual understanding between the leaders of such countries as Russia and the United States is very important.

Barack Obama has already had a chance to personally meet Russia’s Dmitry Medvedev. The US President has never met Prime Minister Vladimir Putin before, but he already knows what kind of a person Putin is. Obama described Putin as a very strong leader of the Russian nation.

Several dozens of Russian fighter jets will be on alert at air bases on the outskirts of Moscow. The air space of the Moscow region was declared the air-exclusion zone.

Most likely, the US President will stay in Moscow at Ritz-Carlton Hotel. He can also choose from the luxury residence for guests in the Kremlin or Marriott Grand Hotel, Interfax reports.

The previous US presidents - Bill Clinton and George W. Bush - preferred to stay at Marriott Grand Hotel during their visits to Moscow. The hotel was closed for all other visitors when Bush visited Moscow. The procession of over 40 vehicles and buses accompanied Bush on his way to the hotel.

Ritz-Carlton has closed the booking for July 5-8, whereas Marriott does not seem to be taking any special preparations at the moment. Nevertheless, the administration of Ritz-Carlton did not make an official confirmation of Obama’s decision to pick the hotel for his stay in Russia’s capital.

If Obama chooses Ritz, he will be accommodated in a five-room Kremlin view luxury suite with huge panoramic windows. The bathroom in the suit is tiled with marble, an employee of the hotel said. There is a special room in the bathroom, where the US president will be able to enjoy a tropic shower.