Russia’s Dmitry Medvedev started his visit to Africa on June 24. Medvedev will travel to Nigeria, Namibia and Angola. Moscow is ready to help the African countries in the development of their natural resources – oil, gas and uranium - despite the economic crisis. 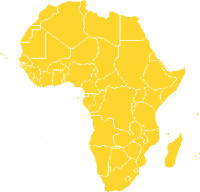 Russia does not conceal its strategic interests in Africa. The black continent can indeed become a new perspective and attractive market if armed conflicts reduce in number there.

The market of developing countries is of great interest to Russian companies working in the energy industry, as well as in the railway, nuclear, defense and machine-building industries. Building new ties and retrieving old ones is extremely important for Russia for it goes about the nation’s entry to highly lucrative new markets.

Russia will have to face serious competition in Africa. China has signed a number of deals in Africa during the recent years. Beijing has a very reasonable approach to its policies on the black continent. It first implements humanitarian projects, credit the economy and signs contracts afterwards.

Nigeria is the first country, which Medvedev visited within the scope of his tour of Africa. Nigeria retrieved its civil administration, approved the new constitution and elected its president in 1999. Nigeria is one of the ten largest oil exporters in the world. The nation’s oil reserves make up over 9 billion tons, not to mention 5.2 trillion cubic meters of natural gas.

The head of Russia’s Gazprom, Aleksey Miller, and the Director of Nigeria’s state-run oil company NNPC Mohammed Sanusi Barkindo discussed an opportunity to sign a $2.5-billion gas production and exploration agreement. The officials discussed the opportunity within the framework of the recent Economic Forum in St. Petersburg.

Dmitry Medvedev’s visit to Namibia on June 24-26 will be the first trip of a Russian leader to this country. Namibia is rich with mineral resources – diamonds, first and foremost. It also has extensive deposits of uranium, coal, lead, zinc, copper, silver, gold and marble. Russia’s diamond and gold giants Alrosa and Renova already carry out their projects in Namibia.

Angola - the last country which Medvedev will visit during his tour – is rich with oil, gas, diamonds, iron ore, copper ore, phosphates, quartz, granite, gold, silver and other raw materials. Most of the people living in such a wealthy nation earn less than $1 a day and die in their forties. Child mortality in Angola is one of the highest in the world.

Russia established its diplomatic ties with Angola on November 11, 1975, when the nation declared its independence. The two countries signed the agreement of friendship and cooperation in 1976.

Russia and Angola conduct successful cooperation in the field of diamond extraction and oil exploration. Russia offers its help to Angola in the development of the nation’s railway network and in the construction of hydroelectric power stations.

Moscow is bringing its economy to the black continent at the time when Washington continues to flex its muscles in the Middle East and Afghanistan.