Russia can do very well without nuclear arms 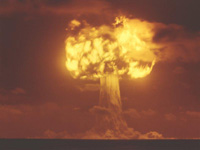 Russia can do very well without nuclear arms

“Of course, I can. Why do we need nuclear arms?” Putin replied with a reference to the US bombing of Hiroshima and Nagasaki.

"Was it us that invented and ever used it? If those who made the atomic bomb and used it are ready to abandon it, along with - I hope - other nuclear powers that officially or unofficially possess it; we will of course welcome and facilitate this process in every possible way," The Associated Press quoted Putin as saying.

The nuclear tests conducted by North Korea on May 25 nullified the nuclear non-proliferation and security efforts in North-East Asia, Russia’s Foreign Minister Sergey Lavrov said as a result of the meeting with his German counterpart.

“We paid special attention to the problem, which moved to the foreground of the international life today – the issues of disarmament, control over weapons, and the non-proliferation of weapons of mass destruction,” Lavrov said at a news conference.

“It is enough to recollect the recent nuclear test in North Korea, which ruined the international efforts in strengthening the Nuclear Non-Proliferation Treaty. The UN Security Council will react to this state of affairs in the nearest future,” Lavrov said.

The international nuclear club includes the USA, Russia, Britain, France, China, India, Pakistan and North Korea. Israel does not comment the information about its nuclear arms, although many experts believe that the country has an impressive arsenal in its disposal.