The dialogue between Russia and Belarus, which looks like a dialogue between two hostile states, continues. President Dmitry Medvedev supported Russia’s Finance Minister Aleksey Kudrin, who offended Belarussian President Alexander Lukashenko with his estimations of the economic policy in Belarus. 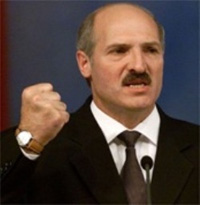 Mr. Kudrin was not very polite indeed, when he arrived in Minsk, the capital of Belarus, a week ago and expressed his thoughts about the anti-crisis policies of Lukashenko’s administration. He particularly said that Belarus’s gold and currency reserves may end by the end of the third quarter of the year, that Minsk should not be optimistic about its economic future. He also criticized the administration of Belarus for its decision not to raise a loan from Russia in rubles ( Belarus originally asked for a dollar loan).

Alexander Lukashenko had a nice conversation with Russian Prime Minister Putin telling him of the bright future of the Belarussian GDP growth. The next day, Mr. Lukashenko “exposed the criminal plot of Mr. Putin and Mr. Kudrin.” The latter “has come into unity with our rascals here who yap on the Western money and teach us how to work,” Lukashenko said.

The Belarussian President added that Russia’s Kudrin came into unity with the rascals following his agreement with Vladimir Putin.

“It is not the first time when they want to take us naked with naked hands, for free. Putin said that he had discussed the situation with Kurdin in an airplane on the way to Minsk. And Kudrin broke into a tirade here . Everything has been coordinated!” Lukashenko said.

“We maintain partnership with our neighbors, we help them overcome the crisis phenomena offering them considerable financial help. There may be a need at times to comment the economic situation in those countries,” he said.

“But we never allowed and will never allow any personal characteristics of the leaders of other countries. We could say something about the efficiency of economic measures that they take, why they ask our help and support. I believe that it is unacceptable from the diplomatic point of view,” Medvedev said.