The Russian government did not take a direct part in the deal between Russia’s Sberbank, Canada’s Magna and USA’s General Motors to purchase a shareholding of German car-maker Opel. However, Prime Minister Putin hopes that the deal will fit into the strategy of Russia’s car industry development, Itar-Tass news agency reports. Putin welcomed the participation of one of Russia’s largest state-run banks, Sberbank, in the deal. 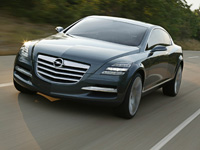 “The government of Russia has the car industry development strategy, and this deal must fit into this strategy,” Putin said at the meeting with Sberbank’s head Gherman Gref and Minister for Industry and Trade, Viktor Khristenko.

Russia’s Prime Minister set out a hope that Canada’s Magna, a renowned supplier of spare parts in the car industry, would continue to expand its activities in Russia .

Gherman Gref said that the deal had not been completed yet. “We will have several weeks to discuss the details,” he said. “The first protocol of intent, which is to be singed between Magna, Sberbank and General Motors, will also be initialed by the governments of the USA and Germany. The document reflects all interests that we have formulated,” Mr. Gref added.

Viktor Khristenko, the Minister for Industry and Trade, is certain that the deal will contribute greatly to the development of the Russian car industry.

“If the deal is accomplished, Magna will have an additional motivation to expand its activities in Russia,” the minister said.

On May 30, the German government and General Motors announced the deal to sell Opel to the consortium consisting of Magna (the supplier of automotive systems and components), Sberbank and GAZ Group. The contract is to be signed within the next five weeks. Magna will receive 20 percent of Opel’s shares, Sberbank – 35 percent, GM will keep its 35 percent and the remaining 10 percent will be distributed between Opel’s employees.