The number of officially registered jobless in Russia has reached 2.2 million, President Dmitry Medvedev said at a meeting with experts at the Institute of Modern Development. 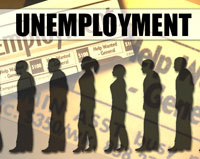 Employment issues and struggle with unemployment was in focus.

“The situation in this sphere is not a simple one, and not only in our country, but the world over, and this is very alarming,” Medvedev said. “The parameters of registered unemployment we had expected toward the end of the year are already here. Nearly 2.2 million jobless have been registered and the real unemployment is growing at a high pace.”

According to the methodology of the International Labor Organization, joblessness over the past six months has been up by 3 percentage points to 8.5 percent of the economically active population, ITAR-TASS reports.

Fears that unemployment and falling living standards could trigger social unrest in the country, which has seen a decade of resurgence on the back of a strong economic boom, is the worst nightmare for the Kremlin at a time of global crisis.

Yevgeny Gontmakher, one of the institute's leading experts, shocked the public last November by publishing a scenario of how mounting social problems could trigger chaos in the country.

"Either we start modernizing Russia at once from economy to politics or we plunge into a crisis from which there is no way out within the existing constitution," he wrote in the report.

Russia, which accumulated over $500 billion in reserves during the boom, is investing heavily to keep afloat key enterprises and help ease jobless figures.

But during a conversation with Medvedev on Tuesday at an event open to the media, Gontmakher sounded more optimistic, Reuters reports.

"We are not facing the problem of unemployment now," he said. "We need to talk about how to handle employment issues when we emerge from the crisis."

The head of the institute, Igor Yurgens, said the situation was under control.