The Russian administration is certain of its actions under the conditions of the economic crisis, including the actions to support state-run and private-owned enterprises, the smooth devaluation of the ruble and the development of employment programs. These are the main theses of Dmitry Medvedev’s interview to Rossiya TV channel. 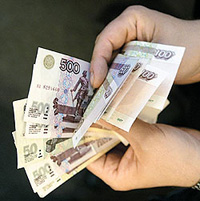 The interview has dotted all i’s. The president acknowledged that he considered the anti-crisis policy his personal responsibility. Medvedev highlighted two issues – the devaluation of the Russian currency, the ruble, and the growing level of unemployment.

Medvedev approved the actions of the Central Bank to weaken the rate of the national currency. “Unfortunately, we have begun to receive less income recently, and our payments in foreign currency have increased. We had to make such changes, but we needed to conduct them in a quiet way, and this is exactly what the Central Bank did, I believe. I am not saying that the ruble must freeze now. The Central Bank believes that the current currency rates mirror the real state of our currency and its current solvency,” the president said. The Central Bank will watch the current rate closely and any sudden fluctuations will thus be excluded, Medvedev added.

“More importantly, as I believe, the weakening of the ruble rate was not conducted by leaps and bounds. It was not conducted in the most barbaric way as it happened in 1998, when our savings lost 300 percent of their value. The weakening that has happened today – 30-35 percent – was conducted carefully. Practically all members of the economic relations – both our citizens and our enterprises – could decide for themselves what they could do with their ruble savings. The general situation in the banking field has not changed, which is very important for stability,” Medvedev said.

“Some economists said that the ruble would collapse. Maybe it was possible to do that from the point of view of economic models, but it could have entailed shocking consequences for millions of our people and our companies,” Medvedev said.

The ongoing growth of unemployment is probably one of the biggest and the most painful problems that Russia has today. “It is highly important to prepare normal measures here. There are three of such measures: to raise unemployment allowances, open new productions and conduct special staff-retraining programs,” he said.

Dmitry Medvedev believes that the government has established appropriate control for the use of the funds. “For example, I personally insisted on the appearance of special supervisors on the part of the Central Bank to make the banking system work for the real sector of economy, for common citizens, not to let money die on accounts, but to make it nourish the economy,” Medvedev said.

The forecast for the economic development does not look promising at all, although the situation in general is quite understandable and controllable. “Everything will be fine. We need to work properly, we have to be honest in our work and it will all come out just fine,” Medvedev said.