The guided-missile cruiser Moskva and Italy's destroyer, the Andrea Doria, held one day drills in the Ionian Sea in the Strait of Messina on Friday. Details of the joint exercises were coordinated on the Russian cruiser. 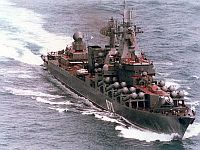 "The ships practiced elements of joint maneuvering, signaling, communications and joint actions on detecting surface targets. Ship-based helicopters from the two vessels were used in the exercises," the fleet press service said.

"The crew of the Moskva will participate in international memorial events related to the 100th anniversary of Russia's Baltic Fleet efforts to rescue citizens of Messina following a devastating earthquake," the spokesman said. Russian and Italian sailors are to hold joint drills in the Strait of Messina on Friday, the spokesman added.

The Messina quake struck with an estimated magnitude of 7.5 on the Richter scale and a tsunami followed that struck many coastal cities with 40-foot (12-meter) waves, causing terrible additional destruction. The earthquake and tsunami killed two-thirds of the city's then-150,000 population.

Meanwhile, Russia will be investigating if it has a right to part of an estimated $3.7 billion worth of treasure discovered on board a British cargo ship sunk by a German WWII submarine, the Russian Culture Minister said on Friday. The British cargo vessel was torpedoed in June 1942 while carrying precious metals to the United States in payment for war assistance under the Lend-Lease Act. It was recently discovered by the U.S.-based Sub Sea Research company off Guyana.

The sunken ship, given the codename the Blue Baron, is believed to contain gold, platinum and diamonds worth some $3.7 billion, possibly the world's wealthiest shipwreck. A large part of the cargo is thought to have once belonged to both the Soviet Union and Great Britain. The Sub Sea Research company that found the vessel has filed an initial salvage claim on the treasure, although Russia, Great Britain, Guyana, and the United States have yet to make any counter claim.