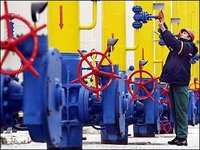 A similar Hourly Report (Form 1A), which also confirms that no gas is being pumped westwards, has been signed by the International Monitoring Commission observers Johann Haumer (OMV) and Oleg Antonov (Gazprom export) at the Uzhgorod gas metering station

International monitors admitted to Russian gas metering stations back on January 12 pursuant to a list presented by the European Commission are currently engaged in monitoring activities.