Anatoli Isaikin, the Director General of the state arms exporter Rosoboronexport, met recently with the creator of the Kalashnikov rifles, the head of the Izhmash Company, Mikhail Kalashnikov. The meeting’s objective was to look into developing a new generation of AK-100 series rifles. 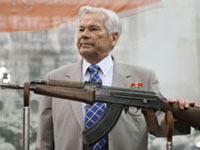 The rifles in this series share a number of innovations that were introduced to the models AK-47, AK-74 and later. Like the AK-47, AK-100 models operate on the explosion of gas produced by the firing of ammunition. The gases eject the used cartridge and insert new ammunition into the chamber.

The models AK-101 and AK-103. AK-101 already use the standard NATO 5.56 mm caliber. AK-103 - Size: 7.62mm. Kalashnikov is a milestone in terms of small arms, especially because of its recognized and insurmountable resistance to all kinds of abuse by users even today. In other words, they are the best in the world. Besides this much appreciated characteristic, the weapon is also easy to maintain and use.